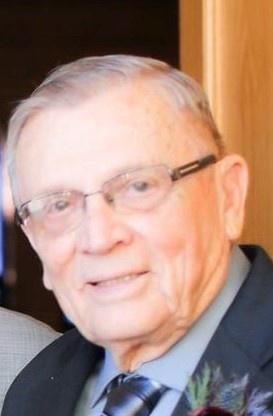 William Lee “Bill” Johnson, 86, of Duluth, passed away peacefully in his home August 26, 2021 surrounded by family. He was born in Duluth, Minnesota to Wilfred and Linnea Johnson on March 5, 1935. He attended Proctor High School where he played football and basketball. He graduated in 1953. After high school, he put himself through college at the University of Minnesota - Duluth where he majored in biology. He met the love of his life, Roberta, at a dance at the Owatka Boat Club and they were married for 63 years.

Bill spent his career as the Land and Timber manager for St. Louis County. He loved hunting, fishing, agate collecting, and golf. Bill served as a Navy reservist for many years.  He was also a longtime member of St. John’s the Evangelist Church, which he attended faithfully every Sunday except for those Sundays in April, because Roberta loved spending a month in Florida each year. Bill’s greatest love was being with his family, by whom he was deeply loved in return. He had a nickname for everyone and was known for cracking jokes with his quick wit bringing levity and joy to every gathering. He will be missed forever.

Bill was preceded in death by his parents and brother, Robert W. Johnson.

To send flowers to the family in memory of William "Bill" Johnson, please visit our flower store.