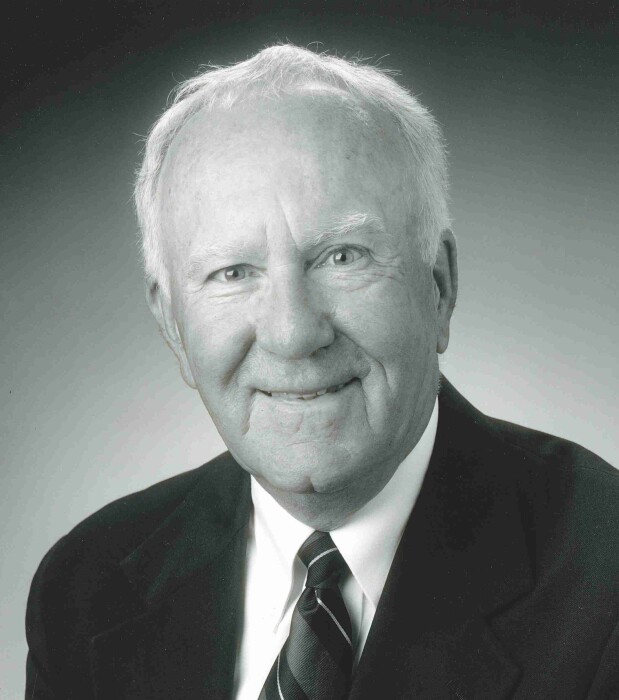 William H. Moser, age 90, of Duluth, died Thursday, April 8, 2021 at Essentia Health St. Mary’s Medical Center.  He was born July 27, 1930 in Faribault, Minn. to Louise (Contois) and Harold E. Moser. He married Irene Mae Hauer on June 22, 1957 in Faribault.  Bill lived a full life with many accomplishments.  After attending grade school and high school in Faribault, Bill enrolled at St. John's University, receiving a degree in Mathematics.  A stint in the US Air Force followed, with a tour of duty in Greenland where he served on the commanding general's crew.  Returning stateside, Bill furthered his education at the U of M in Minneapolis, receiving a degree in Architecture, which became his passion and life's work.  After marrying Irene, the young couple moved to Duluth with son Peter in 1959.  After gaining several years' experience with the firm of Melander, Melander and Schilling, Bill became a partner in the firm of Aguar, Jyring, Whiteman and Moser, which later merged with Morgenstern Stanius and was renamed Architectural Resources, with offices in Duluth and Hibbing.  Bill's kids have fond memories of watching the Christmas City of the North parade from the front window of their dad's office in the old police station on Superior Street.  Many buildings in the Duluth area, both commercial and residential, bear Bill's distinctive style, and contractors, co-workers and customers always appreciated his attention to detail and informative way of making sure everyone was up to speed on every project.

First and foremost, though, Bill was a committed and loving husband and father.  His Catholic faith guided him throughout his life, and he was a longtime member of Our Lady of the Rosary parish (Holy Rosary) and through his hard work and sacrifices made it possible for his children to receive a Catholic education at Holy Rosary grade school and Duluth Cathedral High School.  Bill modeled many virtues, not the least of which was how to lead a balanced life.  Besides being a hard worker, he loved outdoor recreation, enjoying tennis, fishing and especially skiing, which he passed on to many others as a longtime ski instructor from the first year Spirit Mountain opened.  Bill took up golf later in life and immediately became quite good at it, eventually participating in several Senior Olympics.  The family cabin on Caribou Lake near Lutsen, Muhrhaus, was a cherished getaway for many years, as was his later cabin near Solon Springs (he said he gained some time at the beginning of golf season by being further south).  Bill also lived out his love of the city of Duluth through civic involvement.  He served on the board of directors for St. Mary's Hospital, St. Ann's Home and the Depot Foundation, among others.  He was a lifelong conservative and Republican, passing the values of hard work, honesty, individualism and responsibility on to his children and all who came in contact with him.  An active social life was a part of Bill's makeup, too.  He was a longtime member of the Kitchi Gammi Club, and he and Irene loved to dance, attended the symphony regularly and were UMD Bulldog season ticket holders.  Fun gatherings and parties with their many friends in private settings were common, along with multiple family picnics at Brighton Beach and the like.  Dedicated husband and father, talented architect, avid outdoor sports enthusiast, civic leader, and friend to many, Bill is also remembered to have an understated sense of humor.  He was known to share winsome bits of wisdom such as, "Remember, wherever you go, there you are" and "Not to decide is to decide".  Bill will be dearly missed.  Bill was preceded in death by his parents; his step-mother Hilda Moser; his sister Eunice Wirth; and his daughter Margaret Moser in 1980.  He is survived by his wife of nearly 64 years, Irene, his children Peter (Charlene) of Esko, Gretchen (Wells) Patten of Duluth, Polly (Andrew) Robar of  Bloomington and Bill (Michelle) of Edina; twelve grandchildren and five great-grandchildren.  VISITATION:  Thursday, April 15, 2021 from 5–7PM at Dougherty Funeral Home.  A private family service will be held.  Burial will be at Calvary Cemetery.  If so desired, memorials directed to Saint Scholastica Monastery, the Duluth Superior Symphony Orchestra and the DSSO Youth Orchestra would be appreciated.  Arrangements by Dougherty Funeral Home, Duluth, 218-727-3555.

To order memorial trees or send flowers to the family in memory of William Moser, please visit our flower store.