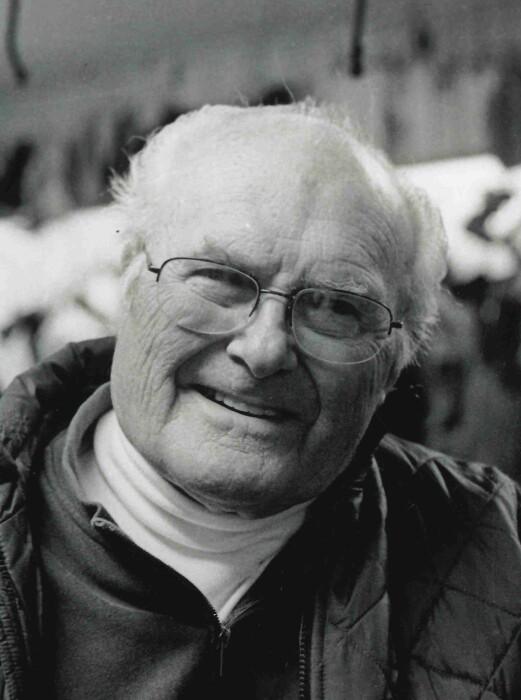 Wesley Kenneth Neustel, 100 of Duluth, passed away peacefully on Thursday November 26th.  He was born in Duluth, MN. on October 29th, 1920, to Clifford and Nora (Wick) Neustel.  He attended Duluth Central High School and worked at Western Auto Supply and Interlake Iron Corporation before joining the Navy in 1942.   Upon his discharge, Wes came back to Duluth where in 1945 he landed a job with Cudahy Packing Company as a salesman and managed a slot machine route just outside of Duluth.  In 1957 Wes joined the H.J. Heinz Company as the institutional sales representative for northern Minnesota. He held this position until he retired in 1982 garnering many top national sales awards throughout his H.J. Heinz career.  Wes married Shirley (Johnson) Neustel in 1953, and together they raised 3 children, Mark, Scott, and Andrea.

Wes was an avid skier.  He grew up ski jumping with the Duluth Ski Club at Chester Bowl.  Later he joined the downhill skiing boom and noticed there were no ski shops north of the Twin Cities, so in 1955 he founded the Ski Hut on the corner of 11th Ave East and 4th Street where it still operates today.  Wes and Shirley enjoyed many trips with their family and friends.  They went on countless skiing and camping vacations and traveled to Europe and Central America. Wes was usually the organizer of these trips and took much enjoyment from introducing folks to these wonderful experiences.  Wes' motto in life became "I see no good reason to act my age", and he continued to alpine ski and travel up until he was 92 years old. Wes was a founding member of the Duluth/Superior Alpine Club.  He was a lifetime board member of the Duluth Salvation Army, former president, and active member of The Sons of Norway - Nortun Lodge, an active member of First Lutheran Church, and a member of the Lake Avenue Loafers.  In 2012, he was inducted into The American Ski Jumping Hall of Fame for his participation and many contributions to the sport.  Wes was an active guy and loved skiing, golfing, camping, fishing, and dancing and biking in later years with his special friend Carol Cohen.

A Celebration of Life will be held on Friday, November 5, 2021, from 4PM – 7PM with remembrances beginning at 5PM, at the Moosehead Saloon at Spirit Mountain, 9500 Spirit Mountain Place, Duluth, MN 55810.

To order memorial trees or send flowers to the family in memory of Wesley Neustel, please visit our flower store.