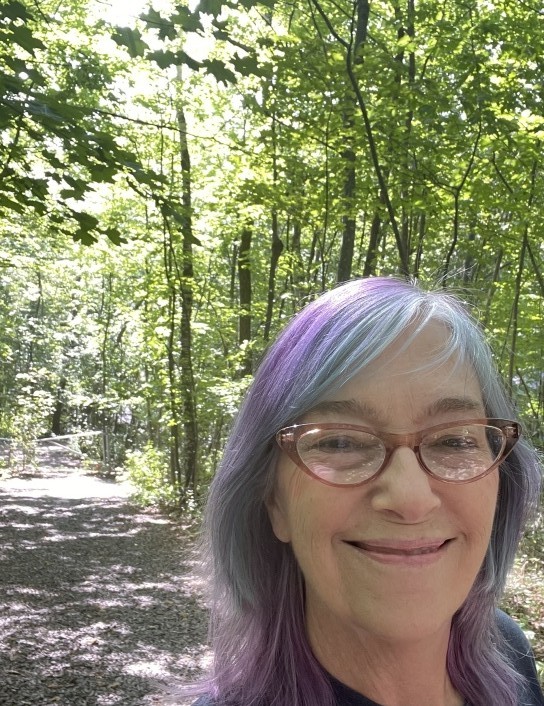 Suzanna Beth Stinnett was welcomed to her favorite planet on October 20, 1955 in Lawton, Oklahoma to parents Travis Earl (“Pete”) Stinnett and Willie Claudine (“Deanie”) Scott Stinnett and her 4-year old sister Kathy DeAnn Stinnett. Ironically, Suzanna died in the St. Luke’s Hospice, Duluth, MN on March 23, 2022, the third day of Spring, with several feet of snow still on the ground.

She remembered life in the small and loving family with great affection and always included her beloved grandmother, Dovie Scott Booth, in the vivid descriptions of small details. She would tell people that she “was raised in the First Baptist Church of Lawton, actually inside the building!” Many hours of memorable escapades with other children around that iconic building in downtown Lawton remained long in her memory.

After Suzanna finished the eighth grade, her family moved to Oklahoma City and she found herself in a different world of big-city school at Putnam City Junior High and High Schools. One of her best skills became typing very fast and accurately, which served her well later. After graduation from high school Suzanna moved to Norman, Oklahoma where she lived until she was 25, then moved to San Francisco,CA, which was a surprise to her family! She lived 10 years in San Francisco proper, until 1989 and the big earthquake, which left her on the wrong side of the broken highway for a while, before she could get back to her apartment.

While she lived in San Francisco, Suzanna worked first as a carpenter on new construction, then freelance as a medical transcriptionist, and was very successful with her skills. She learned a lot of medical vocabulary and never lost her interest in researching the ways people could improve their health with natural methods, primarily nutrition and exercise. She was also a pretty good billiards player, and had a favorite place to play pool and hang out with friends.

After leaving San Francisco, Suzanna moved to the north side of the Golden Gate Bridge, and lived in Sonoma and Marin Counties for 30 years. She lived mostly in Sebastapol and Corte Madera, but occasionally in some other beautiful redwood areas and farmland. There was a time when she did some house-sitting and pet-sitting, and got to live in interesting, sweet properties with sometimes quirky or difficult animals, like parrots (persnickety) or miniature goats (cute).

The mature Suzanna became an advocate for women’s wisdom in the world, and was always encouraging people to listen to and pay attention to the eternal voice of wisdom of women through the ages - especially in these times of great need. She also wrote books, blogs, and instructional materials about how to be more creative and healthy. She wrote a couple of books of fiction as well.

She was always an artist and attended several art courses during her adult life, honing skills to enhance her natural abilities. This interest led her to Burning Man and the many friends she acquired there, including her partner of the last 17 years, Charley Gallagher. Suzanna became part of Charley’s family and loved his children and grandchildren. Burning Man was a big part of their lives together and they spent many hours and days each year in the company of other friends from the Playa Planet.

Suzanna had an irresistible urge to stay informed about the world and felt deeply about all the hurtful things humans do, but she remained to the end an out-spoken optimist, never allowing people to despair. Her heart and spirit would always uplift the possibilities of good, and urge people to keep working toward healing whatever needs healed.

Thank you, darling sister. Your only sister Kathy Stinnett, brother-in-law Sam Black and niece Tamara Nance miss you and love you forever.

To order memorial trees or send flowers to the family in memory of Suzanna Stinnett, please visit our flower store.