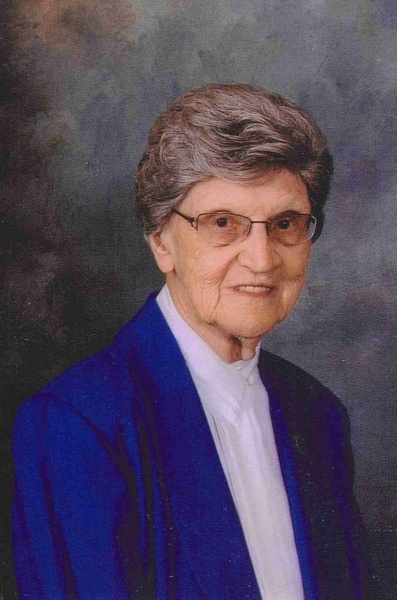 Sister Victorine Sitter, 95, died June 28, 2018 at St. Scholastica Monastery. She was born to Frank and Theresa Sitter on October 6, 1922 in Berwick, North Dakota. Sister was in her 75th year of Monastic Profession.

The oldest of four children, Sister Victorine (Katherine) grew up in the small town of Berwick where her father operated a general store. She knew from the tender age of six years that she had a vocation to be a Sister, becoming an Aspirant and enrolling in Stanbrook Hall High School in Duluth after she completed eighth grade. She made her First Monastic Profession in 1942, and her Perpetual Profession in 1945.

Sister Victorine earned a B.S. in Education from The College of St. Scholastica in 1952. She was a highly talented first grade teacher, providing a wonderful introduction to school life and the joys that lay ahead for her young students. She taught for close to thirty years and served as a Principal at St. Lawrence School in Duluth for five years. After retiring from elementary education, Sister taught typing at Cathedral High School for five years and then as a Records Clerk in Financial Aid Office at The College of St. Scholastica. She returned to the Monastery to serve as Transportation Coordinator for ten years.

One of Sister Victorine’s greatest joys was to serve as a volunteer proctor of exams at The College of St. Scholastica for students needing special accommodations, for which she received the College’s Inspiration Award. She retired from this position at age 94 embracing a quiet life of prayer with her dear sister, Sister Agnes, and the Sisters on Benet Hall.

Sister Victorine was preceded in death by her parents, her sister Elizabeth Engebrit, and her brother Frank. She is survived by her sister, Sister Agnes, the Sisters of St. Scholastica Monastery, many relatives and friends. The wake service/Morning Prayer will be held Monday, July 9, 2018 at 9:45 a.m. in Our Lady Queen of Peace Chapel, with a Mass of Christian Burial following at 11:00 a.m. Father John Pfeifer will preside. Interment will follow at Gethsemane Cemetery. Arrangements are by Dougherty Funeral Home. Memorials preferred to St. Scholastica Monastery.

To send flowers to the family in memory of Sister Victorine Sitter, OSB, please visit our flower store.