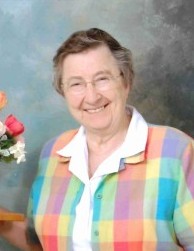 Sister Joyce Fournier died in Benet Hall at St. Scholastica Monastery on August 7, 2019 with the Sisters by her side. She was in her 68th year of Monastic Profession.

Joyce was born in Warren, MN on October 17, 1930 to Leo and Anne (Harder) Fournier. She grew up with two brothers and two sisters; a younger brother, James, died shortly after birth. She learned responsibility early when she and her siblings assisted their parents in running the family bakery in their hometown.

Joyce graduated from the high school in Warren, MN. She entered St. Scholastica Monastery in January 1950 and professed her perpetual vows in July of 1955. Sister Joyce celebrated her Silver Jubilee in 1977 and her Golden Jubilee in 2002.

Sister Joyce earned a BA in Education from the College of St. Scholastica and taught in the Catholic schools for twenty-seven years in Duluth, Phoenix, Hibbing, International Falls, Chicago and Washington, DC. Some of these years were also spent in administration as principal. She served as Sub-prioress of the Benedictine Community from 1975 until 1984. In 1992 she established her own business at the Monastery known as St. Scholastica Photography and Framing where she served until her health failed.

More than what Sister Joyce did is who she was. She was a gifted photographer who was recognized throughout the city and beyond for her talent and expertise. She was a woman of hospitality who created a spirit of community, opening her studio as a coffee shop at the Monastery where there was always a good pot of coffee brewing with goodies to be shared. She was also a woman who was always willing to go the extra mile for another. Rich with service, organizational skills, humor, generosity and hospitality, she has inspired and enriched the lives of many.

She was preceded in death by her parents, Leo and Anne (Harder) Fournier, sisters, Marie (Huard) Fournier and Judith Fournier, and her brothers, Dale, Charles and James.

Left to cherish her life are her nieces and nephews, her cousin, Fr. Denis Fournier, OSB, her many friends, especially her lifelong, faithful friends, Catherine Little and Madonna Domenichetti, and her Benedictine Sisters, especially Sister Grace Marie Braun with whom she shared many years of leadership.

The Sisters are grateful to the staff of Benet Hall and Essentia Health - St. Mary’s Hospice for the loving care they provided Sister Joyce.

The Wake Service/Morning Prayer will be held on August 17, 2019 at 10:00 a.m. in Our Lady Queen of Peace Chapel at St. Scholastica Monastery. The Mass of Christian Burial will follow at 11:00 a.m., Father William Fider, Presider. Interment in Gethsemane Cemetery. Arrangements by Dougherty Funeral Home. Memorials to St. Scholastica Monastery preferred.

To order memorial trees or send flowers to the family in memory of Sister Fournier, OSB, please visit our flower store.