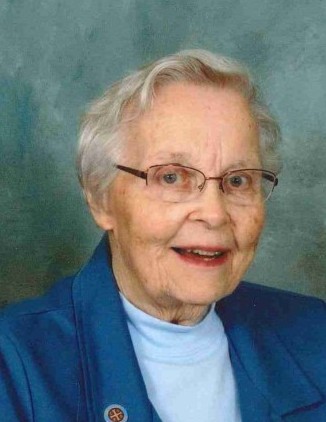 Sister Marguerite (Florence) Baxter, OSB, 94, died June 4, 2019 at St. Scholastica Monastery. Born in Iron Mountain, Michigan on February 22, 1925, she was the daughter of Charles and Margaret (Scully) Baxter. Sister was in her 72nd year of Monastic Profession.

The youngest of seven children, Florence moved to Houghton, Michigan with her family when she was just two years old. After graduating from Houghton High School, Florence followed her older sisters to The College of St. Scholastica. Florence selected medical technology as her field of study. In her senior year she entered Duluth’s Benedictine Community and graduated with a BA in chemistry and minor in biology.

Sister’s earliest ministry assignment was in elementary education, first in Duluth at Sacred Heart and then in Minneapolis at St. Bridget’s. She was transferred to the clinical laboratory at St. Mary’s Hospital where she earned certification as a medical technologist and worked for the next twelve years.

In 1968, Sister Marguerite earned a Master of Arts degree from the University of Minnesota, Minneapolis. She again began teaching as Chair of the Medical Technology Department and later as co-chair of the Health Science Division of The College of St. Scholastica. For the next twenty-five years the Department flourished under her leadership. In 1997 Sister Marguerite was awarded the status of faculty emerita and became student advisor for the Health Sciences Division, which she thoroughly enjoyed until the year 2000.

In 2000, Sister Marguerite was assigned to the Monastery Liturgy Office, where she organized, planned, and prepared computerized materials for liturgical services. Throughout her life, the depth of her intelligence was visible through all the detail she mastered and organized with great care and precision.

Sister Marguerite was preceded in death by her parents, her brothers William, Charles, and Robert and her sisters Margaret Elizabeth Monroe, Alice Gribble, and Catherine Rubbo. Besides the Sisters of St. Scholastica Monastery, she is survived by 27 nieces and nephews, friends and associates. The Wake Service/Morning Prayer will be held on June 15, 2019 at 9:30 a.m. in Our Lady Queen of Peace Chapel at St. Scholastica Monastery. The Mass of Christian Burial will follow at 11:00 a.m., Father Seamus Walsh, Presider. Interment in Gethsemane Cemetery. Arrangements by Dougherty Funeral Home. Memorials to St. Scholastica Monastery preferred.

To order memorial trees or send flowers to the family in memory of Sister Baxter, OSB, please visit our flower store.