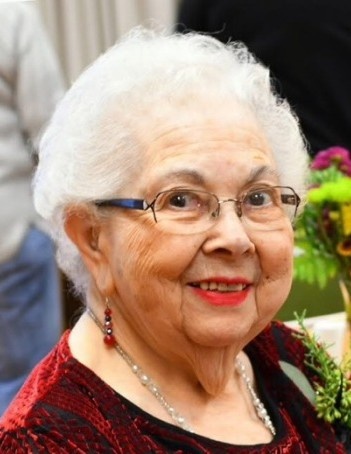 Shirley was born to Louis and Sarah Green on November 24, 1927, in Duluth. She was the youngest of five siblings and one of only two to be born after her family immigrated to America. Shirley graduated from Duluth Central High School and attended one year of business school; she worked as a secretary in a loan company for a short time. She married Charles Goldberg in her sister’s home on June 29, 1947. Together they raised four children. Shirley and Charley owned and operated Goldberg’s Kosher Meats in Duluth for many years. After the store closed in the late 1960’s Shirley returned to business school for additional training and was then employed at HBJ Inc. She loved her work there and made several life long friends. Once retired, Shirley and Charley sold their home in Duluth and lived both in Arizona and Florida, creating wonderful memories and warm friendships. Shirley remained in Florida for one year following Charley’s death, returning to Duluth in 2003. She was a member of Temple Israel and had been active in both Hadassah and B’nai Brith.  Until recently she enjoyed knitting, reading, playing mah jongg, eating out, and keeping up with family and friends. She was known for her gorgeous smile and ability to make others feel special.

Shirley was preceded in death by her parents; her husband, Charles, in 2002; her siblings and their spouses, Charley’s parents and his dearly loved brothers and sisters.

Shirley is survived by her daughter Donna (Brian) Brown of Lakeville, MN and her children Sheralyn (David) Oman of Duluth and Adam (Elena) Snedker of Lakeville; her daughter Tracy (Charles) Goman of Duluth and their children Michael (Amy) Goman of Eden Prairie, MN, and Peter (Dawn) Goman of Duluth; her daughter Deborah (Thomas) Smith of Phoenix, AZ and their children Leah (Chad) Freed and Lindy Harlow of Scottsdale, AZ; and her son Jeffrey (Catherine Daniels) Goldberg of Georgetown, TX, and his children Niki Goldberg of Seattle, WA and Molly Goldberg of McMinnville, OR; and nine great-grandchildren. She is also survived by her sister-in-law Esther Goldberg, of Deerfield Beach, Florida; a special niece, Patricia Cronin, of Superior, WI; and many other loving nieces and nephews.

The family wishes to thank St. Ann’s Residence for their excellent care of Shirley for the last eight years. More recently, the rehabilitation floor staff at Chris Jensen Health & Rehabilitation Center and the staff from St. Luke’s Hospice Duluth provided invaluable care to Shirley and support to her family. For this we are very grateful.

Donations to Temple Israel or St. Ann’s are preferred in lieu of flowers.

To send flowers to the family in memory of Shirley Goldberg, please visit our flower store.