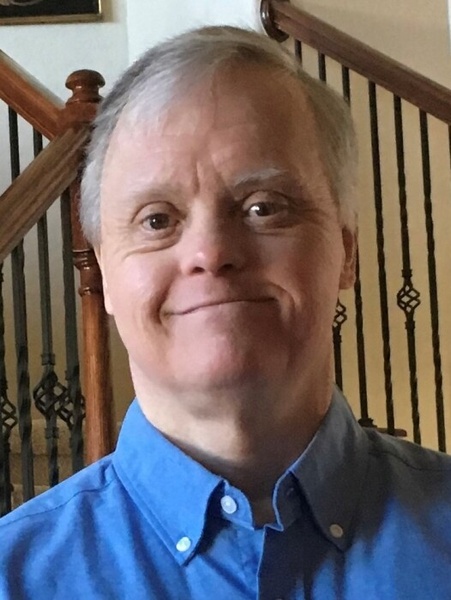 Scott Warren Neufeld was called to join his Lord and Savior on July 18, 2021, in Duluth Minnesota.  Scott was born to Jerry Warren Neufeld and Sharon Rae (Hagberg) Neufeld on the 28th day of November 1961.  As a lifelong resident of Duluth, Scottie was well known and respected in the community.  He was recognized for his kindness and warm personality, always exuding his presence as the Perfect Gentleman.

Scottie spent most of his adult life involved in the many programs offered by Udac and D.R.C.C. in Duluth.  He was an active member and enjoyed many years with Udac focused on his work and the abundant social events sponsored by the organization. He was respected and admired by the Udac staff and members because of his polite demeanor, positive outlook and willingness to be an active participant in the next adventure.  Scottie’s work and social independence were graciously supported by Udac for many years.

Scottie was a longtime resident of the Jitney House.  He was an excellent house mate and could frequently be found in the company of the staff assisting with meal preparation, shopping or just going out for a quick hamburger, donut and a diet coke.  Scottie is fondly remembered for his assistance when a Jitney House manager was obligated to wear a tie for a certain social event.  As the manager was unable to tie a tie, he was relieved that Scottie came to his aid and performed the intricate task of properly preparing the tie for the event.

Scottie was also well known for his athletic ability and very competitive spirit.  He participated in many sports activities throughout his life.  While participating on the Special Olympics team, he was an avid competitor and an energetic supporter of his teammates.  Scottie’s competitive spirit was always evident whether bowling, shooting pool, skiing, playing basketball or on the ice playing hockey.  He was always a formidable opponent who usually emerged as the victor.  When the competition was concluded he happily enjoyed a non-alcoholic beer as he celebrated his successes.

Scottie enjoyed many trips to Texas to spend time with his sister, Shelly Pascale (Phil).  During these visits Scottie and Shelly would cook, swim, sight-see and of course find time to ride the horses.  They spent many hours together absorbed in the moment, listening to their favorite music and enjoying the special love and bond that can only exist between a brother and sister. They also found time to attend BBQ’s, dinners, dances and other social events.  When the music started Scottie could be found on the dance floor dancing the Texas two-step with the ladies.  He and his dancing partners would certainly enjoy the music and the dancing.  On Sunday mornings Scottie would prepare for church and could be found in Phil’s closet searching for just the right tie to wear.  He was known to typically select the tie that was also Phil’s favorite.  True to his Texas connection and to the dismay of his Minnesota friends, Scottie was an avid Dallas Cowboys fan and proudly displayed his Cowboy’s game jersey as he waited for the contest to begin.

Scottie joins his mother Sharon in the presence of their Lord and Savior to begin their eternal life together.  He is survived by his father, Jerry.   He is also survived by his sister Shelly and her husband Phil and sisters Cynthia and Nicole.  He will also be lovingly remembered by many other family members and friends.

Scottie will be deeply missed but never forgotten as his kindness left an indelible impression on all who knew him.

A special and sincere thank you to Udac and Jitney House for the lifelong love and care extended to Scottie.  The staff of each of these organizations was truly an integral part of Scottie’s life and happiness.  Also, sincere thanks to the staff at Benedictine Living Community for the loving care provided to Scottie.

To send flowers to the family in memory of Scott Neufeld, please visit our flower store.