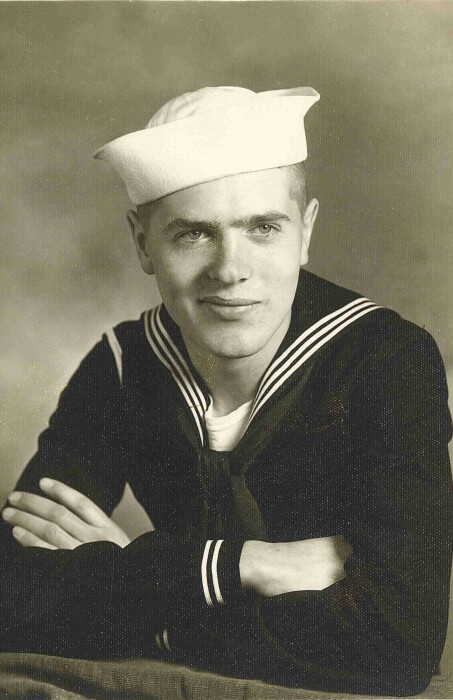 Robert Ray Drannen, 95, of Duluth, passed away on Friday June 25, 2021, in St. Luke’s Hospital.  He was born in Perham, MN on May 30, 1926, to Raymond and Catherine Drannen.  Bob graduated from Duluth Central High School in 1947.  He was a U.S. Navy Veteran serving as a Third Class Carpenter’s Mate in the Seabees during World War II. He was proud to say he was one of the first off the ship in Okinawa where he had the honor of planting the American flag. Using his GI Bill, he learned the electrical trade and worked for Western Electric. He later sold and serviced x-ray equipment for Eastman Kodak. Following this, Bob and his wife Eileen moved to Lake Worth, Florida where they owned and operated the Martinique Motor Lodge. Bob was a member of St. Mary Star of the Sea Catholic Church. He loved classic cars, especially his 1936 rumble seat convertible. He enjoyed going to the cabin, fishing, working in the yard, and being outdoors. Bob always had a Hershey bar in one pocket and a rosary in the other.

Bob was preceded in death by his parents, wife Eileen, son Jeffrey, and sisters Marjorie Staudohar, and Betty Mae Romundstad.

To order memorial trees or send flowers to the family in memory of Robert Drannen, please visit our flower store.