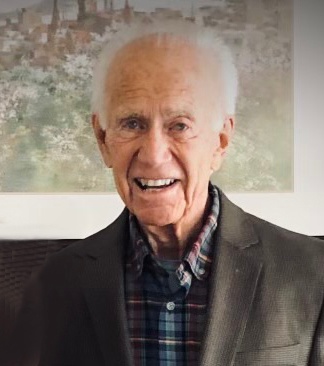 Robert Raymond DeRoche, 91, of Duluth, died Thursday March 4, 2021 at Lakeshore Ecumen.  He was born in Duluth to Clement and Leola DeRoche.  He graduated from St. Jean’s High School and 2 years later married his high school sweetheart, Lorraine Tessier.  Together they raised 7 kids and enjoyed 70 years of marriage. He was an active member of Cathedral of Our Lady of the Rosary. He was preceded in death by his wife Lorraine, daughter Susan, brothers Michael and Richard, and a sister Jackie.

Above all things, Dad loved his family and the time spent with them at the family cabin in Cotton, also the numerous family functions, gatherings, and grandkids events.  He was; spiritual, kind, caring, generous and self-reliant. He enjoyed golfing with his brother Jim and many other friends. He also had a “work family” which was important to him during his 25 years as the Target Store Manager.  In that role he was a mentor and an advocate to many.  He also gave back to his community in leadership roles with; Create Jobs Inc, United Way Campaign, St. Mary’s Hospital, Serra Club, Chamber of Commerce, and additional volunteer activities with; Holy Rosary Church, Union Gospel, St. Scholastica Priory, & St. Mary’s Birthright.

To send flowers to the family in memory of Robert DeRoche, please visit our flower store.