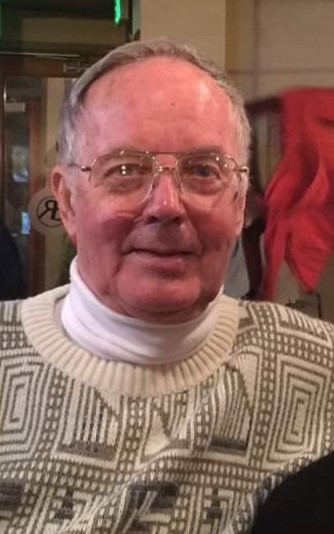 Lord Richard Peter Olsen of Pike Lake passed away peacefully in the home of his daughter Pauline the evening of January 25th surrounded by loved ones.  Dick fought a noble fight against Covid 19 and proudly came out victorious only to acquire pneumonia three weeks later.

Richard (Dick) was first born of two children to Albert and Jenny (Nestdahl) Olsen on June 11th, 1931.  He was educated at Proctor High School and remained a passionate supporter of his beloved alma mater up through his 80’s as a co-organizer of class reunions.  He remained friends with everyone from his class (1949), these friendships meant the world to him.

Dick served proudly in the Navy and US Navy Reserves as a Seebee then moved up the North Shore to Lax Lake, a place he loved his entire life.  He worked as a lineman for Northwestern Bell and adored his job, the people he served and everyone he worked with.   In 1963 he married the love of his life, June Seymour.  Along with her daughter Patti they moved to Duluth Heights in 1964 where their daughter Pauline was born shortly after in 1966.  He was then working an office job for US West Telephone Companies and enjoyed every second of it, for the next forty years.  In 1973 they moved to Pike Lake; the place Dick loved the most.  The family moved into a cabin at the request of June, with no plumbing and no insulation.  Dick built by hand, Junes dream home from what was mostly a raw shell with an outhouse. His parents and his brother (Guy) and his family (Fern, Cheryl, Debbie) lived on the lake and for the rest of his life Dick loved this place most.  Here he had a multitude of friends of every age and remained friends with them until his death.

Dick was notorious for his long and fascinating stories and held court with anyone who would listen.  Topics ranged from the draft dodger he and his father caught breaking into cabins on the lake in the 30’s to his obsession with the Donner party and their covered wagons. He had incredible knowledge of Stonehenge and the city of Bath in England where he traveled with his daughter in 1998. Mostly, he had a notorious ability to pick the best football players in college. He often called the Vikings front office with his personal draft picks. He was always so disappointed they wouldn’t listen to him and continually reminded them that they should have paid attention to him when Russell Wilson was a sophomore.  Dick had a knack for meeting celebrities and often people thought HE was famous.  He actually ended up in a Gloria Estefan (upon her request) video on MTV when he was 70 years old.  He didn’t know who she was until she got up on stage.

Dick and June loved UMD hockey with a passion and were “hockey parents” to many Canadian players.  His house became home to so many to just come and do laundry, eat home cooked meals, discuss girl problems, draft issues (he loved this part of course) and play on the lake where Dick would teach them how to do the “upright” on the jet ski well into his late 70’s.  Dick would hand out frozen snicker bars to swimmers training for the triathlons, offer beers to random passerby’s and was the main record keeper for ice out, a job he took quite seriously.

Later in life, after the death of June, Dick hit the road with daughter Pauline and traveled extensively through California and to nearly all his Granddaughter’s (Kaitlyn) ski races out west.  He loved watching her race and at these races he had a massive captive audience for storytelling.  He became a fixture at these races and the participants from all over the world would seek him out for stories. Even in his mid 80’s he would hike up Steamboat mountain to get to the base of the downhill course. He cheered everyone on, had beers with their parents then would silently slip off and seek out a snow making employee to show him exactly how the snowmaking machines worked or the groomers or whatever was in front of him at that moment.  This was usually after dark which terrified his daughter, but he always came back.

Dick went by a few names.  Dick “lost an edge” Olsen earned proudly at the age of 77 when he broke his hip playing hockey.  Also, his alter ego name, William Archer Butler which he would use often to confuse Doctors attending to him after his stroke.  It caused quite a commotion on occasion and he found it hilarious! He would use “Spyder Olsen” when making reservations because he insisted there were to many Dick Olsens and someone else will steal his reservation.  Lord Richard was a title bought for him by his daughter at a fundraiser for a National Park in Glencoe Scotland.  He was quite proud of this title, bought or not he owns a square foot of land in Scotland, so he is indeed a Lord.

Mostly and above all else, he was humble and kind to everyone.  He was inquisitive, generous, thoughtful, and had an outrageous sense of humor until the very end.  Dick loved life so much and loved people with his whole heart.  He truly lived life simply, honestly, and faithfully.

Dick was proceeded in death by his parents, his lifetime best friend and brother (Guy), and love of his life forever and always (June).  Dick leaves behind: Daughters Pauline (Kirk Vesterstein) Olsen, Patti Ann (Erik) Pederson, Grandchildren Jeffery, Nicky and Kaitlyn and many nieces and nephews he loved as his own children.

As a final request, he asked that all memorials be directed to the Boys and Girls Club of Duluth.

In consideration of COVID19, please wear a face mask for a walk-through visitation February 22nd at Pike Lake Presbyterian Church from 11:00-12:00.   Internment following with Military Honors at Sunrise Memorial in Hermantown.

To order memorial trees or send flowers to the family in memory of Richard Olsen, please visit our flower store.