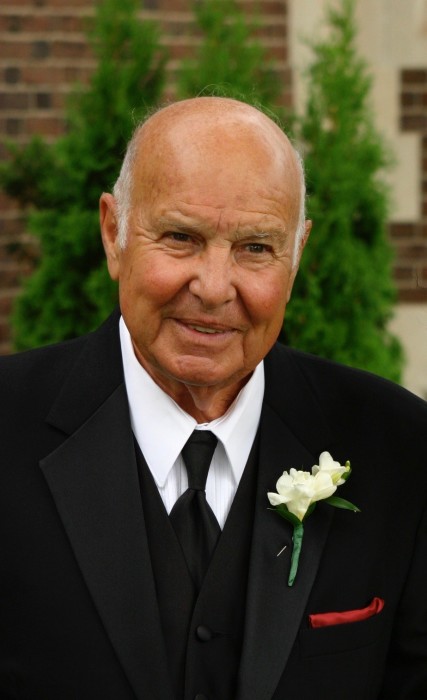 Richard Anthony Amatuzio, devoted husband, father and grandfather, died peacefully at his home on Wednesday, January 29, at the age of 90. Richard was born October 11, 1929 to Margaret and Albert Amatuzio, both Italian immigrants. Growing up on Raleigh Street in West Duluth provided Richard easy access to Lake Superior as a child, which cultivated a life-long passion for the lake. His simple childhood provided him few luxuries yet taught him the value of work and the power of love. After graduating from Denfeld High School, Richard began his pursuit of the American dream. Born with a strong will and endless ambition, he went on to achieve this dream through multiple business endeavors. In the truest sense of the phrase, he was a self-made entrepreneur. He built a foundation for success on early experiences that demanded dedication, loyalty, and grit – pitching papers as a newsboy in West Duluth, hustling a deal as a car salesman, working the docks as a longshoreman, and sailing the Great Lakes for the Tomlinson Shipping Company.  Richard’s love for the Lake and these experiences inspired future business ventures. In 1959 when the St. Lawrence Seaway opened, he capitalized on the new market potential to service the shipping industry. In 1962 Richard founded North Star Marine Company, a line-handling, security and pilot boat service. In 1972 he opened Bayfront Marine Services, a ship-cleaning service, that handled ship waste and dunnage – the property was later sold and is now Bayfront Park. Richard was former-partner and vice president of AMSOIL, owner of the iconic Main restaurant in Duluth, and was involved in multiple other business interests. Richard poured his passion for people into the community. He shared his energy and wicked sense of humor with friends and through engagement with many organizations – he co-founded and was a lifetime member of the 242 Yacht Club, the Elks Club, the Italian American Club, Northland Country Club and a card-carrying member of the ILA. In 1981, his fellow members in the Duluth-Superior Chapter of the Propeller Club recognized Richard as the Harbor Man of the Year. Richard was also proud to serve as one of the original Republic Bank Board of Directors until 2015.  There was no end to Richard’s devotion and love for his family. Richard married the love of his life, Elizabeth Magie on July 15, 1972. Together they raised two children, Richard Jr. and Susan. The family spent many summers aboard the King Richard cruising and fishing along the shores of Lake Superior, and at the cabin on Lake Nebagamon. Richard will be remembered for his enduring passion and dedication to family. Richard was preceded in death by his father Albert, his mother Margaret, stepfather Daniel Erickson, brothers Donald and Albert, sister Maria Johnson, and many friends. He is survived by his wife of 47 years, Elizabeth, son Richard Jr. (Kimberly) and step granddaughter Lexie, daughter Susan Fryberger (Tiegen), grandchildren Ingrid, Deaken, and Tiegen, sister Antoinette Sand, brother-in-law Robert Magie (Marilyn) and many nieces and nephews. Richard was true to himself and his family. He loved playing hockey in his youth, listening to jazz, procuring glamorous automobiles, boats of any kind, and linguini with clam sauce. He lived a life that was bold, unconventional and full of family, life and love. Richard lived the American dream. Richard’s family would like to extend sincere gratitude to Dr. Robert Donley for years of care and advocacy, as well as a heartfelt appreciation to the many nurses and caregivers who demonstrated kindness and compassion for Richard in his home over the past year. As an expression of sympathy, memorial contributions may be sent to Animal Allies Humane Society in Duluth. Visitation will be held on Wednesday, February 5, from 5:00-7:00 PM at Dougherty Funeral Home, 600 E 2nd St., Duluth, A  Celebration of Life will be held on Thursday, February 6 at St. Benedict’s Catholic Church, 1419 St. Benedict St, Duluth,  at 11:00 AM, with visitation beginning at 10:00 AM. Arrangements by Dougherty Funeral Home, Duluth, 218-727-3555

To send flowers to the family in memory of Richard Amatuzio, please visit our flower store.