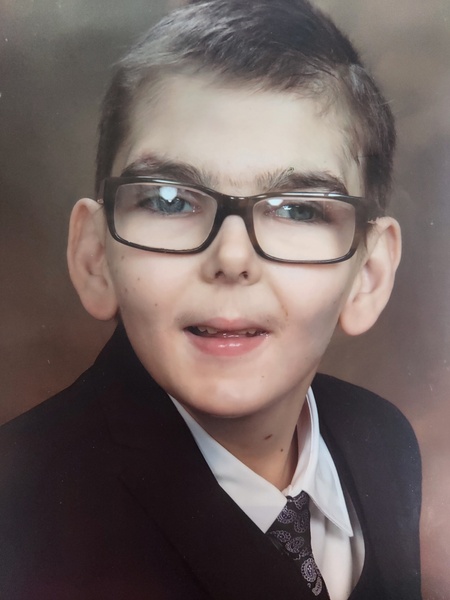 Born June 12th,1993, in St. Paul, Minnesota to Patrick and Rosemary Kenney, Patrick has been a warrior, and an absolute light from the beginning.

He grew up with his four siblings, two parents, and one indomitable spirit. He has lived through more trials and tribulations in 28 years than most experience in a lifetime. Despite a deck stacked so heavily against him, with sickness and disabilities getting in his way from birth, he has always been pure joy, strength, and kindness. To an on-looker, it may have appeared Patrick needed a lot of help, but to anyone who was lucky enough to know him, it was clear he was the real teacher and giver. Although he could not communicate verbally, there was an endless depth of intelligence, love, and emotion in his eyes.

We lost a brother, son, and friend who is so much more than the disabilities that plagued his body. Everything was harder for him than the rest of us, but he never let it stop him from trying. That strength and resilience were humbling to witness and it has been a true inspiration and honor to have him in our lives.

In recent years, Patrick has fought many, many health-related battles. Through these tremendously difficult times, he was never alone. He had a first class team of friends who loved him dearly.

We, Patrick’s family, would like to thank Maria Miyares and the entire staff at Taylor SLS Home from the bottom of our hearts for their unwavering kindness, patience, and love.

We are deeply thankful for Pat’s teams at Essentia Hospice, St. Louis County Social Services, North Shore Community Options, and Community Support Services who worked endlessly to give Patrick the life he deserved.

We are also forever grateful for Nicki DeRosier, who has been a second mother to him since he was 3 years old.

Patrick loved his family deeply (and anyone who knows him, knows what a gift and honor that is). His parents, his 3 sisters, and his brother got to love him and learn from him all our lives. He filled our days with endless laughs, lessons, and love. Our family will never be the same without Pat here, but we will carry him and the things he taught us with us forever.

Patrick’s Mom and Dad worked tirelessly to provide him with everything he needed emotionally, physically, and medically. They were able to keep him living at home until he was 22 years old when his needs required 24 hour professional staffing.

And you can’t talk about Patrick without specifically talking about his Mom. She was never off his mind, and he was never off hers. She dedicated a massive piece of her heart and her life to advocating for him, defending him, and fiercely loving him. She would say that he gave her more than she ever could give him, but Pat would argue that (we will call it a draw).

There are not words big enough to describe the impact Patrick had on the world. Because we knew him, we have all been changed for the better. Most importantly, Patrick taught us that the little things you do with someone, for someone, and because of someone are the real meaning of life.

It is with tears in our eyes for the tremendous loss of Patrick in this world, but a smile on our faces knowing he is free, that we send him off to the next, beautiful place.

A private service for family and close friends will be held at Dougherty funeral home.

To send flowers to the family in memory of Patrick Emmet Kenney Jr., please visit our flower store.