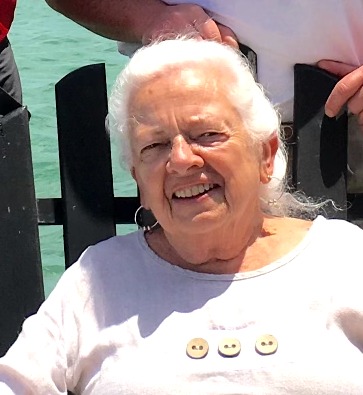 Norma was born in Detroit Michigan, the only child of Nora & James Pollock.  Norma moved back & forth between relatives in Detroit & Hamilton, Ontario in her early years, because of the economics of the depression.  She spent most of her childhood living on a hobby farm on 18-Mile Road outside of Detroit. Norma rode horses, learned to shoot & to hunt with her own double-barreled .410 shotgun, a gift from her father.  She was a strong student in school & graduated from Clarenceville HS in 1944 in Michigan near her home in Detroit in a class of 21 students.

She met, & eventually married, Robert Edward Miles on September 24, 1949.  They both enjoyed listening to popular music & jazz with friends at the Wyoming Show Bar in Detroit.  Mom liked to tell the story of the maître’ d that appeared at Robert’s side to let him know that he should escort his date out the rear door post haste, as the police at the front door would take a dim view of her age. They also enjoyed going to watch the Detroit Red Wings at the Olympiad & were in Toronto when the Maple Leafs beat the Wings to win the Stanley Cup. Mom & Dad shared a brew with a boisterous group of players when they came to the house of the team trainer (Mom’s cousin) after the win.

Norma & Bob built their first house in Royal Oak MI in the late ‘40s and moved to Grand Rapids MI in the early ‘50s. Norma worked as an administrative assistant to the President of a large department store and enjoyed dressing fashionably for that position through her sizable store discount.  While living in Grand Rapids, Norma & Bob had two sons Bruce & Mark.  The family moved to Sturgis MI in 1960 and lived there until 1965, when they moved to Bloomington, MN. Bob & Norma left Bloomington in 1981 and moved to Backus MN. They explored the western & southern states in an RV and then moved to Florida & Arkansas in later years. They moved to Cross Lake, MN in 1991, & finally to Duluth, MN in 1997, where they built their final home together in Northland Estates.  Bob passed away in October 2007, & Norma moved to Lakeshore in 2008. Mom loved living at Lakeshore, socializing with her great friends there, & with “the younger girls” at her book club that met in Duluth & Superior.

Norma stated that she was unbelievably fortunate & expressed immense gratitude for her family, friends, and travel. She had an unbelievable eye for natural beauty, and the beauty in other people. Norma dressed very well with a designer’s eye & had a flair for fashion. Going out to dinner with Mom was not the time to wear a pair of jeans, it was a time to dress well. We think that she may have owned a pair of jeans, but we don’t remember her wearing them.

Norma also was a fierce decorator, & anyone that visited Mom at her Lakeshore apartment were typically stunned at the style & decoration choices.  There was always jazz playing in the background.  Mom believed that “One does not stop buying books because there is no more shelf space”, and that “Addicts of minimalism should steer clear of my home” (Vincenti).

Travel was a regular habit and was always made easier by her explicit directions (“Find us a nice hotel WITH a restaurant and a bar”), and her travel flasks of brandy and gin. As recently as March, Mom drove to Marquette (with stops at her favorite shops & restaurants) to visit Mark. Just a couple of years ago Mom was on a trip & Mark had asked the tour director to keep an eye on Mom & not let her ride horseback or whitewater raft due to a shoulder injury.  Mom indignantly replied that she would be riding & rafting, because she “…would do whatever the hell I please.”

Mom passed away doing what she loved, traveling & exploring with friends on a trip with her travel family through Bursch Travel. She was walking through the Biltmore Estate (and remember, no one could keep up with her) when she had a sudden, fatal heart attack. Although attended to during the attack by a family friend that was a retired EMT, she had always wanted to go quickly, and it worked out very well for her that way. However, we are already missing her, and the smile that you could hear over the phone. She led a great life and always encouraged us to do the same. Her generosity toward others, in words, deeds, and philanthropy provided a fantastic role model for all of us.

There will be a brief service at Ecumen Lakeshore for Mom’s Lakeshore friends. A separate service will be held at First United Methodist Church, 230 E. Skyline Pkwy, Duluth, MN 55811 at Noon on Saturday, June 11.  Arrangements by Dougherty Funeral Home, 600 E. Second St., Duluth, 218-727-3555.

To send flowers to the family in memory of Norma Aileen Miles, please visit our flower store.