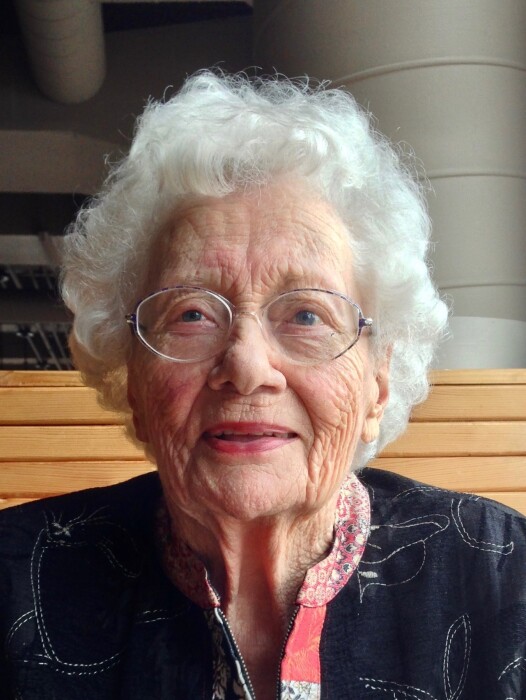 Mavis Elaine Cedergren (Earles) died at Marywood, in Duluth Minnesota on Oct. 20, 2020. She was born in Kenmare, ND to Andrew and Esther Earles on Feb 23, 1928.  She was a 1946 graduate of Chisholm High School and later Hamline University.  Mavis married John H. Cedergren on Jan 31, 1953 during a raging blizzard.  Mavis and Jack lived in Duluth their entire married life.  Her career included social work for St. Louis County Social Services, the Multiple Sclerosis Society and Polinsky Medical Rehab Center.  Through her work at Polinsky, she organized Arthritis education and support groups as well as served as coordinator for

the Duluth Stroke Club.  During these years, she also served as board president of the Aftenro Home and served on the Benedictine Health Service Auxiliary board of directors.  After retiring in 1987, Mavis and Jack embraced travel and embarked on many memorable trips worldwide.  In addition to traveling, she especially enjoyed her years volunteering with the Salvation Army.  When not volunteering, she and Jack spent many hours aboard The Aftenro, (Evening Rest) their retirement boat, especially when it was docked.

Although she had either limited or no vision the last 2 decades, Mavis never complained.  She was the eternal optimist and consummate party planner and always loved a picnic at Brighton Beach with her family.

Mavis was preceded in death by her parents and her husband.  She is survived by her daughters Mary (Todd) Troxell of Salt Lake City and Anne (William) Howard of Superior, and her beloved grandchildren:  granddaughter Courtney (Matt) Nolan of Salt Lake City and grandsons Erik of Duluth, Ethan of Big Sky, MT, and Jesse (Amber Lum) of Eden Prairie, great grandson Avery, brother in law and sister in law Ben and Mary Kirkendall and 3 nephews, Jack, David and Tom Kirkendall.  She is also survived by her godson, Frank Redfield.

To send flowers to the family in memory of Mavis Cedergren, please visit our flower store.