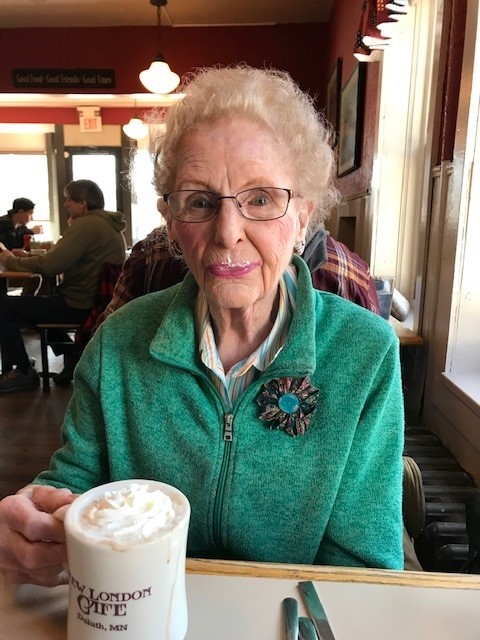 Mary Lois Main (nee Lindsay) was born July 2, 1925 and passed away on June 25, 2022 just shy of her 97th birthday. Mary grew up in Duluth, attended The Marshall School, worked at the Wolvin (Missabe) Building as a teletypist, studied nursing for a year or so at The College of St. Scholastica, then in 1948, married Calvin S. Main. Forty-nine years of marriage started on the Iron Range and led her around The Great Lakes from Michigan to Ohio and, in 1971, back to her hometown, Duluth.

Mary was a homemaker first and foremost, but occasionally worked outside the home as a one-time unit secretary at St. Luke’s Hospital – she always said if she had to do it over again, she would’ve like to pursue her interest in medical records. She also worked on and off as a sales associate for high-end dress shops. She loved and had lots of clothes, but never wore a pair of jeans in her life.

A devout Catholic, Mary was a life-long parishioner of St. Michael’s in Lakeside and, in her later years, frequented the Saturday afternoon Mass at The Cathedral of Our Lady of the Rosary.

And while she was as a stoic Irish woman of Scottish descent, Mary’s most endearing quality was her penchant for laughter. She loved to laugh, often at nothing. In hard times, humor made her resilient and feisty. The people who knew her well called her a spitfire.

After Calvin died in 1997, Mary lived independently, always with a dog at her side, in her Lakeside home for a total of forty-nine years – coincidentally the same number of years she was married – until she suffered a stroke in April 2020, at the beginning of the COVID pandemic, which brought about vascular dementia, and it was COVID that got hold of her in the end.

She is survived by a son, Craig L. Main and his wife, Sandy; a daughter, Catherine Alexandra Main and her husband, David Preis; a granddaughter, Rachael Main; and a grandson, Aaron Main.

To send flowers to the family in memory of Mary Lois Main, please visit our flower store.