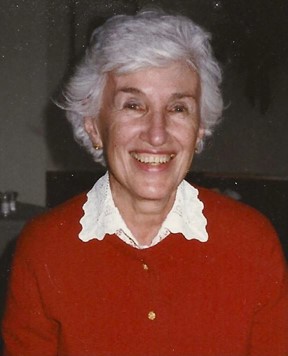 Mary Kathryn Butler Lanigan, 97, of Mendota Heights, MN passed peacefully, surrounded, by family on April 30, 2021. Mary was born October 12, 1923, in Los Angeles, Calif., to Verda Meehan Butler and William Butler. Mary moved to Duluth in 1930 with her mother and her sister Martha. There she enjoyed fishing at the cabin on Side Lake. The sisters attended the Lab school in Duluth, and in 1938 the family traveled to Europe. While there, Mary and Martha attended school in Lausanne, Switzerland and Florence, Italy.

In August of 1939, they were able to book passage to New York on the Queen Mary. After sailing to the US under black out conditions and war being declared during the voyage, the Queen Mary was converted to a troop ship upon arrival. The family returned to Duluth where Mary attended and graduated from Stanbrook Hall High School. Mary attended Marymount College in Tarrytown, New York and graduated from Tobe-Coburn School for Fashion Careers in New York City. She lived and worked in Chicago before returning to Duluth. There she married William Alexander Lanigan in 1947. She was a Member of The Junior League of Duluth and a volunteer at Saint Mary’s Hospital. Skiing and tennis were nearly lifelong pursuits. Mary appreciated art, music, and the theater. She had a keen sense of style and was an accomplished cook. Her early introduction to world travel led her on many adventures throughout her life. Mary traveled to all seven continents, flew in a hot air balloon in France, went on safari in Africa, met tortoises in the Galapagos, flew on the Concorde and sailed on the Queen Elizabeth II. She loved animals, caring for nature and the preservation of the earth. She had an exceptional green thumb and loved to be outdoors. Mary was recycling before there was a name for the process. Her sense of humor was appreciated by all who had the great fortune to meet her. She found humor and lightheartedness in the smallest things. One of her last days was spent on the patio enjoying a beautiful spring day, eating a chocolate chip cookie. A life well lived.

The family would like to give generous thanks to the staff of Heart to Home of Mendota Heights for their kindness and thoughtful care of Mary over the past 3 years.

In lieu of flowers a gift to a charity of your choice or The Minnesota Conservation Volunteer.www.mndnr.gov/mcvmagazine is appreciated.

To send flowers to the family in memory of Mary Lanigan, please visit our flower store.