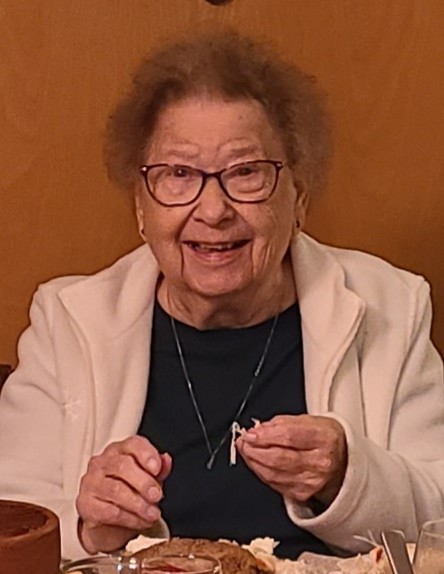 Marjorie was born February 19, 1931, in Roseau, MN to John and Teckla (Brunell) Miovac.

After high school Marjorie and her best friend moved to Duluth, MN, set for an adventure with visions of becoming a nurse. In 1950, Marjorie married the love of her life, Laverne “Vern” Lofdahl. They would have been married 72 years on January 27. Reunited in heaven; they are celebrating their anniversary a little early!

Marjorie will be remembered as an avid traveler, often prompting the question, “Where is Marge heading this time?” She was a true adventurer, always up for a journey, making friends, and making jokes. She was fiercely independent, loyal, wise, and kind.

Marjorie was a devoted Christian, attending Pike Lake Presbyterian Church. She stayed busy raising her children, volunteering at the church, cooking, baking [the most delicious pies and cookies], and eventually returning to work.

She got her CNA when her youngest daughter, Paula, was in high school, working several years at Nopeming Nursing Home before retiring and becoming a “Damo-old Lady” at Sam’s Club where she worked for many years.

If she wasn’t rosemaling, sewing the most beautiful clothing and costumes, or making Lefse, you might find her out in the garden, amongst her beloved gnomes, working late into the night. She was always caring for others and making many friends along the way. Marjorie was strong, silly, witty, and she will be missed every day.

Marjorie, or simply “Auntie Marge” will be sorely missed by numerous nieces, nephews, friends, and by her ‘partners in crime’ the Rummikub gals Olive, Becky, and Fay.

She taught us all how to live a life full of lots of love, a dash of spice, and that adventures are good for the soul!

Marjorie was preceded in death by her mother and father; husband Vern, “The Banker”, brothers Van, Duane, Maynard, and Walter, sisters Rose, Irene, Phyllis, and Velma.

Light refreshments and snacks will be served immediately following the service.

In Lieu of flowers, and in honor of Marjorie, please send donations to Pike Lake Presbyterian Church, the Damiano Center or The Union Gospel.

To send flowers to the family in memory of Marjorie Lofdahl, please visit our flower store.