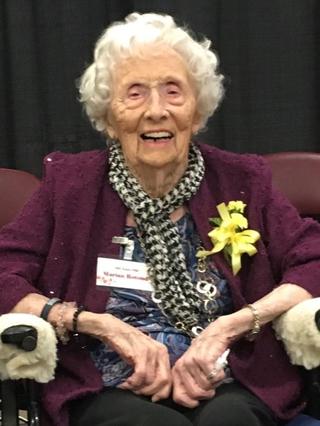 Marian Olive (Jones) Rotondi, 103, of Duluth died Thursday, March 12th at North Shore Estates, with MaryAnn and her special dog, “Piper” by her side. Marian was born on November 4th, 1916 in Osakis, Minnesota to Harry and Mary Faith Jones and graduated from Osakis High School in 1934. After moving to Duluth, she married Lawrence Rotondi in 1938. Marian worked as a seamstress for J.C. Penney’s in West Duluth. She purchased the West Duluth Ben Franklin Store on Grand Avenue, which later became the V&S Variety Store. Marian was a long-time member of St. James Catholic Church where she was also the parish housekeeper for many years. Marian was active in the West Duluth community including Irving School PTA President, a Girl Scout Leader, President of West Duluth Women’s Club, an auxillary member of American Legion #71, and she worked in the Foster Grandparent Program at Laura MacArthur Elementary School for 22+ years.

She was preceded in death by her parents, Harry and Mary Faith Jones; husband, Lawrence; siblings Glenn, Kenny, Marge and Sal.

The family would like to extend a thanks to St. Luke’s Hospice and also a very special thanks to the caring staff at North Shore Estates who have been part of Marian’s family for six years.

Visitation will begin on Tuesday, March 17th at 10:00am with Mass of Christian Burial at 11:00am at St. James Catholic Church, 721 N. 57th Avenue West, Duluth, MN. Burial at Oneota Cemetery. Memorials are preferred and may be directed to St. James Catholic Church. Arrangements by the Dougherty Funeral Home, 600 E. 2nd Street, Duluth, MN. (218)727-3555.

To order memorial trees or send flowers to the family in memory of Marian Rotondi, please visit our flower store.