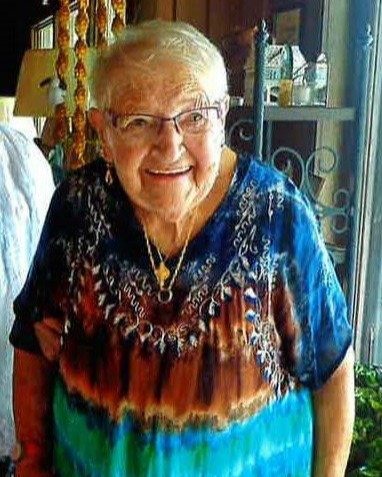 Marian Davis Levine, 97 passed away Sunday, Nov. 6 at Marywood. She was born July 10, 1925 in Duluth, MN to Chester and Victoria Davis. She graduated from Cathedral H.S. in 1943. She married Joseph Deck in 1947 and had 4 daughters. Marian was very involved with her girls, serving as Girl Scouts leaders for her daughters troops, and many volunteer hours at school, church and community. She helped develop the auxiliary at Chris Jensen nursing home, was a member of the 20th Century organization, Red Hats Society, and Gnesen Senior Group.

Marian was an excellent seamstress, sewing many of her daughters’ clothes. She was also an excellent cook, always having enough for anyone who would drop in. She married Jake Levine in 1969. They spent many happy years at their home on Island Lake. Her family was most important to her and she valued many friendships.

Marian was preceded in death by her parents, her husband Jake, her daughter Patricia and her bother Richard Davis. She is survived by her daughters Mary Jo (Curtis) Slowinski, Carole Mostrom (Chuck Stewart), Katie (Bob) Pfeffer; 7 grandchildren, and 10 great grandchildren.

Family would like to thank the staff at St. Ann’s and Marywood for their excellent care of their mother.

Funeral Services will be at Dougherty’s Funeral Home on Saturday, November 12th. A 10 AM visitation will be followed by a Mass of Christian Burial at 11.

In lieu of flowers, Mom would appreciate memorials to Amberwing or Damiano Center.

To send flowers to the family in memory of Marian D Levine, please visit our flower store.