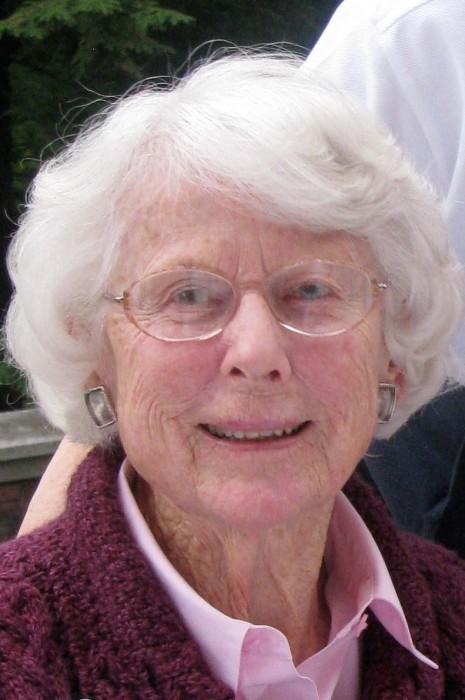 Marian Parker Congdon, a resident of Westwood Apartments in Duluth, passed away at home on February 24, 2020 at age 102. Born in Duluth on November 9, 1917, Marian was the younger daughter of Joseph F. and Elinore R. Parker. She graduated from the high school department of the Villa Sancta Scholastica in Duluth in 1935, and attended Wells College, Aurora, New York and the University of Wisconsin, Madison, where she pledged Kappa Kappa Gamma sorority. In 1940, Marian married Guilford G. H. Congdon of Duluth and moved to northern California.  In 1942 they returned to Duluth. They moved to Claremont, California in 1951, and two years later settled in Atherton, California, which was her home for 48 years.  Marian was preceded in death by Guilford, her husband of 54 years, by her sister Elinore (Beau) Maney and her brother Joseph Parker. In 2001, Marian again returned to Duluth, where she lived until her death.

Marian was a life member of the New England Historic Genealogical Society, a member of the Crown of Charlemagne in the USA, and a member of the Daughters of the American Revolution. She served on the Board of the National Society of Colonial Dames for 6 years and was a member of the Junior League since 1938 in the Duluth, Palo Alto and San Francisco chapters. She undertook a life-long family history research project, completing two full ancestries: that of her father, Joseph Fletcher Parker (1880-1962), and her mother, Elinore Emily Russell (1881-1962). She also served on the Board of the California Genealogical Society from 1971-73.

At age 10, Marian greeted President Calvin Coolidge with a bouquet of flowers as his entourage passed in front of her parents’ house on E. 5th Street. During the 1960’s and 1970’s, Marian and her family summered in Inverness, California, where she learned to sail and became a stalwart member of the Inverness Yacht Club Race Committee. She was also a founding member of the women-only Inverness Rowing and Chowder Society.

Marian was an avid walker, taking her children on Sierra Club hikes in the California mountains, and walking 5 miles every day for 50 years, often in the company of one of her beloved dogs. For 25 years, she spent her winters in Carefree, Arizona, and made many close friends in that community. She never tired of the beautiful silhouette of the desert mountains against the evening sky.

Marian’s life will be celebrated at a funeral mass at the Benedictine Living Community Chapel, 935 Kenwood Avenue, on Saturday, February 29th, at 2:00 PM, followed by a reception. There will be a private interment at Forest Hill Cemetery in Duluth. The family prefers that any memorial donations be made to the All Saints Annual Fund at St. Scholastica College, Tower Hall 1410, 1200 Kenwood Ave., Duluth, MN 55811 or to the Animal Allies Humane Society of Duluth, 4006 Airport Rd., Duluth, MN 55811.  The Congdon family is deeply grateful to the staff at Accentucare, St Luke’s Hospice Duluth, and the Benedictine Living Community.

To send flowers to the family in memory of Marian Congdon, please visit our flower store.