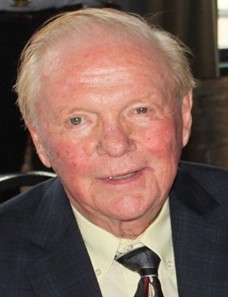 Lloyd Marvin Johnson, 86, of Duluth, died Thursday, July 1, 2021 at home with his family by his side.  He was born September 3, 1934 in Duluth to Marvin J. and Gerda M. (Sundell) Johnson.  Lloyd attended Proctor High School.  He married Doris Y. Sams on March 16, 1957.  He was a dedicated husband, father, grandfather and great grandfather.

Lloyd was an entrepreneur of many business adventures throughout the years, but his passion was the family farm.  He thoroughly enjoyed traveling the world with his family and friends.  The words he lived by and instilled in us was “you have to look ahead, you can’t dwell on the past.”

Lloyd was preceded in death by his parents, his wife Doris in 2004, and his sister Lois Carlock.  Lloyd is survived by his daughters:  Linda (Dennis) Spikberg of Culver, MN, Bonnie (Paul) Knight of Grand Forks, ND, Judy (Joe) Leveille of Maplewood, MN and Kathy (Bill) Gagnon of Duluth; grandchildren:  Alisha, Tim, Chris, Nicole, Josh, Daniel, Alyssa, Casie, Ian and Kristen; eleven great-grandchildren; his brothers Ken (Georgia) and Gary (MaryJo); and his special friend Gloria Hanson.  Visitation will be held Wednesday, July 14th. from 5-7PM at Dougherty Funeral Home and continue on Thursday, July 15th. from 10 AM until the 11 AM funeral service at Grace Lutheran Church.  Burial will be at Sunrise Memorial Park Cemetery, Hermantown.

To order memorial trees or send flowers to the family in memory of Lloyd Johnson, please visit our flower store.