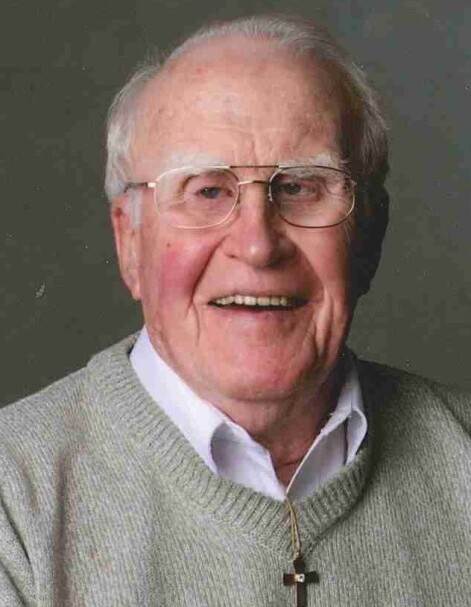 Leonard J. Bauman quietly departed this earthly existence for the glory and wonder of heaven with Beth, his loving wife of 71 years, holding his hand and whispering “I love you.”

Len was born to Anthony and Irene Bauman in Minneapolis and raised on the farm where he learned the attributes of faith, hard work and love of the outdoors.   After graduation, Leonard proudly served his country during WW II in Europe as a member of the 94th Reconnaissance infantry troop, followed by state side service in the National Guard.

‘Red’ (Len) met Beth Saunders during college in St. Cloud while each were earning their teachers' license.  He later went on to earn a Masters of Mathematics.  The Newman Club at St Cloud State brought them together in a shared faith. They also shared a love for dancing and given the opportunity could cut quite a Jitterbug or Schottische.

Leonard and Beth were united as husband and wife on August 7, 1950.

Len was a man of faith, family and service. After living a short time in Pierre, South Dakota Len and Beth, along with their first 3 children moved to St. Paul, Minnesota.  They spent a few years there before they moved in 1960 with their 6 children (plus 1 on the way) to Ely, MN. It was here that Len and Beth raised their family of 6 boys and 5 girls. They welcomed an AFS student, Leonor Rodriguez, into their home and family in 1977.

Leonard taught hundreds of 4th graders over many years, served as an elementary principal, volunteered for Meals On Wheels, Veterans of Foreign Wars, the American Legion, was a charter board member of Veterans on the Lake Resort, plus numerous other community organizations.  He was a member of the St. Anthony’s Catholic Church Knights of Columbus and regularly assisted as a Lector and Eucharist Minister.

He relished time outdoors especially fishing, camping, grouse hunting and taking drives along the forest lined roads of Northern Minnesota with Beth.  His love of God’s creation can be found in the many photos he snapped through the years and the deep appreciation of the outdoors that he imparted to his children.

Leonard and Beth remained vital members of the Ely community until 2000 when they relocated to Duluth seeking closer connections with their grown offspring and grandchildren.  St Michael’s Catholic Church in Lakeside became their spiritual home.  Once they chose to move to senior living the Benedictine Westwood community welcomed them.  Leonard’s health slowly became more and more challenging eventually requiring additional assistance so he moved to the Benedictine Marywood community.  He was gently and respectfully cared for the last couple of years within the Living Waters neighborhood of Marywood. Even in his final illness he maintained a positive outlook and trusted in God’s promise of eternal life. His family is extremely grateful for the care he received from all the Marywood staff and hospice nurses of St. Luke’s.

He had a full life living brightly in the light of his faith and love of family.

In lieu of flowers, memorials preferred to your local church or Veterans on the Lake:  https://www.veteransonthelakeresort.org/