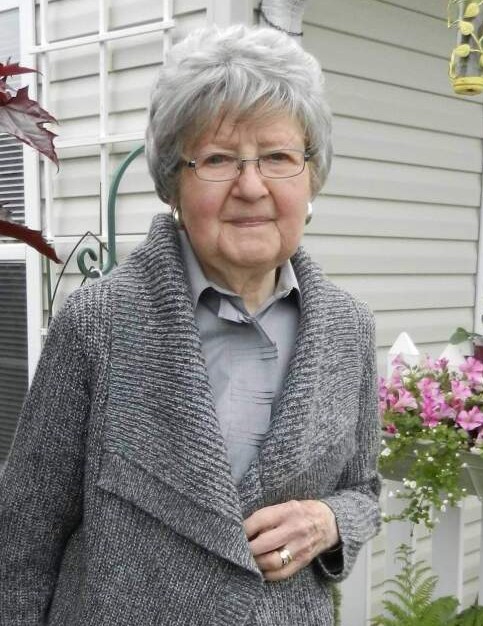 On Sunday January 31, 2021 Kay left this earthly life peacefully in hospice at Marywood, Benedictine Health Center. She imagined loving arms reaching down to carry her up and reunite. She would have been 94 in just a few weeks.

Kay was the cherished only child of Leo and Lena (Archambeau) Versailles, born February 19th, 1927, in Lake Linden, Michigan.

After high school, she moved to Detroit where she met and married George Tervo; in 1948 they returned to the Copper Country, to Houghton and Hancock, where George started the Tervo-White Agency. Duluth was next, in 1954, and life was good.

Kay and George had one of those marriages that made it seem easy; you would often see them holding hands. Respect, love, affection, and appreciation flowed both ways. Kay was the at-home mom, creative, fun, a healthy cook; involved with children Judy and Bob; George the breadwinner with a good woman behind him. There were always backyard flowers on the kitchen table. They were the 1950's model family in a close-knit neighborhood that became life-long friends, noticeably the Contardo's and Gunderson's. Together Kay and George golfed, traveled, were active in the Duluth-Superior Camera Club. Kay took up painting, studying first with John Peyton, and over the years made many beautiful landscape and nature paintings; made more friends. With George's encouragement, Kay and painting friends often took off on day-long outings with their cameras and paints, and these were some of her most cherished memories. Special times were with Erna Ullrich, Ether Beeman, and close friend Martha Juntunen. George made her frames and bought her cameras. When she developed Type1 diabetes at 40, George was a staunch support. That she managed it well and stayed physically fit enabled her to beat all the odds and impress her doctors.

Kay and George traveled often, spending many winter months In Port St Lucie, FL, with memorable trips to Scandinavia, Europe, Hawaii, Colorado, Pennsylvania, and Arizona. Family trips were frequently back to the Copper Country and family there, many hours spent "out at the camp", and the Lake Superior shore.  They danced atop the Eiffel Tower, fished for brook trout at Rice Lake, and were in the movie Iron Will.

When George died in 2001, Kay moved to the Miller Creek 55+ neighborhood, and for those next 20 years had beautiful gardens and made many close new friends. She was known for her kindness, good cheer, and graceful ways. Her condo was a small art gallery of her work. Patio hummingbirds, chickadees, and monarch butterflies gave her joy.

Due to Covid, a celebration of life will be held at a future date.

To send flowers to the family in memory of Katherine Tervo, please visit our flower store.

No services to be held