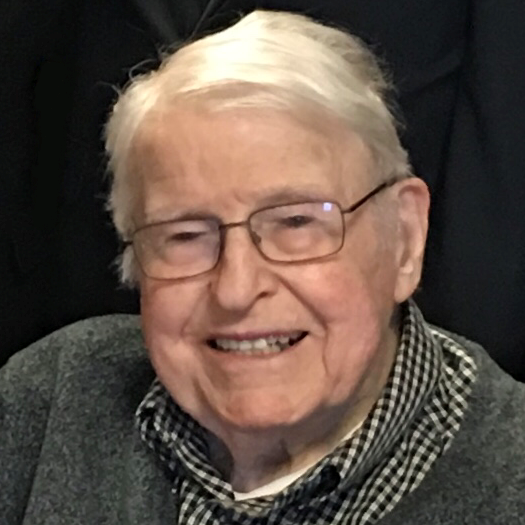 On Friday, June 5, Vince (age 96), went home to his Lord and Savior Jesus Christ. He died while in hospice care at the Benedictine Health Center.

Born September 16, 1923, in Duluth, MN, Vince was the only child of Albertine Marie (Ouellette) and George Henry Sauve. After graduating from Duluth Cathedral High School, he enlisted in the Army Air Forces and was an aircraft mechanic in World War II, serving in the China-Burma-India Theater. When he returned from the war, he earned his business degree from UMD. During his career, he worked at the D.M. & I.R. Railway Company and the U.S. Postal Service.

Vince loved football and was an ardent fan of Notre Dame and the MN Vikings. He enjoyed reading history, biographies and keeping up on current events. After retirement he could often be found at the library or enjoying an occasional round of golf.  He took a special interest in doing the family grocery shopping and took great pride in finding the best deals each week.  Vince loved to tell jokes and his family always laughed because his delivery and reaction were more priceless than the joke itself.

Throughout his life he generously supported those less fortunate, along with many other charities related to Catholic vocations. He was involved with Knights of Columbus, Meals on Wheels, and the Boy Scouts.

Vince met his future wife Mary while she was attending school at The College of St. Scholastica. They married on July 9, 1955, and together they raised their six children in the Chester Park neighborhood. Vince was proud of his children, their families, and accomplishments.

He was a lifelong parishioner at the former Sacred Heart Cathedral and the Cathedral of Our Lady of the Rosary. Vince will be remembered for his perpetual devotion to his family and Catholic faith. He became Mary’s primary caregiver after she suffered a stroke five years ago. After over 60 years in their home, Mary and Vince moved to the Westwood Senior Community in 2018, bringing them back to the grounds of St. Scholastica where they first met.

We want to express our thanks and gratitude for the compassionate care provided to Vince by Dr. Timothy Kleinschmidt, the nursing and hospice staff at Benedictine Health Center, and the staff and caregivers at Westwood Senior Community.

Vince’s family would have preferred to have had a public mass celebration of his life, but due to Covid-19, we will hold a private Mass of Christian Burial at the Cathedral of Our Lady of the Rosary. He will then be laid to rest at the Minnesota State Veterans Cemetery in Duluth with military honors. Arrangements are being made by Dougherty Funeral Home.

To order memorial trees or send flowers to the family in memory of Joseph "Vince" Sauve, please visit our flower store.