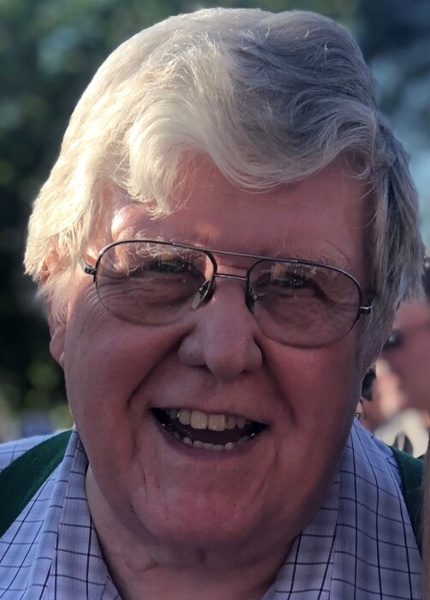 John passed peacefully on October 23, 2021, "a quintessential fall day", surrounded by love and family.  He lived a big, full life on his own terms.  Before he passed at Essentia St Mary’s, we celebrated him as the patient of the month (with a jelly filled donut) for his resilience and love of tackling hard problems.  His human body simply presented unsolvable problems for mere mortals.  He is now enjoying the peace that eluded him during life with his “council of aunts” listening to great music and enjoying ALL the snickerdoodles.

He was many things, wrapped up into a bundle "nearly 6' tall", with a great head of hair (as he’d tell you).  He was a student, teacher, mentor, son, dad, grandpa, uncle, friend, husband, surgeon “and trained anesthesiologist”, scientist, innovator, entrepreneur.  He was “one of a kind”, charismatic, witty, brilliant, mad scientist, and a “serious Christian.”  He lived his faith and continuously sought to find a way to live God's will for him.  He believed in “bona fide miracles” that he routinely witnessed.

He held or participated in writing an estimated 40+ US and international patents, in the area of biomedical engineering.  But he felt he would have been more comfortable living in the early 1900s, preferring percolator coffee and to heat his house with wood he cut himself from trees he felled with friends and neighbors.  He was comfortable no matter what the situation, in his everyday uniform - blue jeans and suspenders.

He was creative and enjoyed writing poetry and cabinet making in his woodshop that he took joy in outfitting with “more tool than you think you need”.  He also loved any audience that would patiently listen to him recite a poem, tell a story or a joke.  He loved being able to make other people laugh.  He also loved to share ideas when he was “struck by another wave of brilliance.”

As kooky “Uppa John” to some of his granddaughters, he was authentically interested in his grandchildren, what they were doing and asked them to “tell me all about it.”  He was so proud of them and love spending time with them.

He loved music and his tractor.  He played the coronet and sang barbershop and in the church choir.  Everyone always knew when he was at church; he was proud to belt out any hymn with his “mellifluous tones”.   His John Deere tractor had a special parking spot in his “Taj Garage”.

He found great joy observing nature in action around him, especially while enjoying his leisurely breakfast that included cheerios, English muffins, and lots of butter, honey, and red currant jelly.

Born to Dr. Harvey and Agatha Brekke on 5/9/1943 in Minneapolis, John attended Breck School and graduated from Edina Morningside High School in 1961.  He loved playing in the marching band and hated spelling.  His first jobs were in Sporting Goods at Dayton's in Downtown Minneapolis and driving a taxicab.

John graduated from St Olaf College (1964), and University of Minnesota School of Dentistry (1968).  He completed his residency at Washington Hospital Center, Washington DC (1971), then spent time as a surgeon in the Army.  He was proud to have earned a private pilot’s license during this time.

John and ex-wife, Mary Ellen, moved to the Duluth area in 1972, where he established himself as the first oral surgeon to practice on the Iron Range and in Duluth.  He loved "living in the north woods" and vowed he’d never leave.  One of his goals was to ensure his daughters “never forgot where you came from”.

Gaining sobriety around 1980, he retired from oral surgery as his true passion and life's work became evident.  He pursued it with fervor for the rest of his life.  He made significant scientific advancements in biomedical engineering and spent his last few years focusing on 3D cell culture and stem cell work, a focus that had grown out of earlier work that included tissue engineering, burn dressings and bone graft substitutes.  With him, there was “never a dull moment.”

Somehow, he also managed to teach at UMD in the early 2000s.  He got such joy in working with young people and his students; encouraging them to “ask the next question” and “push the envelope”.

Memorials will go to fund a new John Brekke scholarship aimed at furthering his scientific interests.

We would like to thank the teams at St. Mary’s Essentia ICU and cardiothoracic surgical team for the extraordinary care they provided in dad’s last weeks of life.  You created a gift to help us prepare for his passing and we are extremely grateful.

To send flowers to the family in memory of John Brekke, please visit our flower store.