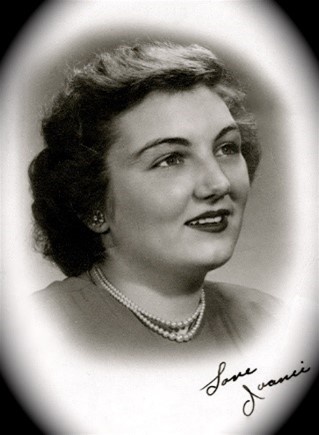 Joan Theresa (Belshan) Claveau died peacefully within the Benedictine Health Center’s Safe Harbor special care unit on December 21, 2020, surrounded by love.  Joanie Belshan was born in Elgin, Illinois on May 26, 1933 to Joseph and Imogene Belshan. The younger of two children, Joanie was known for her fun-loving mischievous nature, her sense of humor, ready laugh, and kindness.  She entertained her four children –-and later her grandchildren—with many funny stories of her years growing up among cousins and friends in Elgin.

She graduated from St. Edward’s High School in Elgin, Illinois and went on to work for a bank, first as a teller and later as a supervisor for ten years.  She was known for her ability to carefully calm those bringing complaints to the bank with diplomacy and her wonderful sense of humor.  Her future husband, Don, was living in Elgin while attending the Elgin National Watch Company Watchmakers College. Joanie noticed him at church and arranged to “bump” into him after Mass one Sunday morning at St. Edward’s Catholic Church.  Don and Joanie were later married in the same church on February 27, 1960.  They moved to Don’s hometown in Duluth, Minnesota where they remained and raised their four children. It was common to hear Joanie say in her high-spirited way, “I just love Duluth.”

Joanie was very generous and charitable, especially with her time and talents. She volunteered in multiple capacities at St. John the Evangelist Catholic Church and School in Woodland, numerous political campaigns, served as a Hospice volunteer for many years and loved the element of hospitality in her role helping tourists and Duluth locals at the North Shore Information Center. She was a friend to all, and an awesome Mom to many more, well beyond her own four beloved children.

Mrs. Claveau’s children would like to thank the staff of Mount Royal Pines Three in Woodland, BeeHive Homes Assisted Living & Memory Care of Duluth and the Benedictine Living Community in Duluth for the compassionate care Joanie received in recent years; they recognized the light and spirit in our wonderful Mother and we are grateful.

Joanie is survived by her four children:  Mary (Randy) Lee of Duluth, MN; Donald Jr. (Rae Lynn) Claveau of Cambridge MN, Daniel (Tracy) Claveau of Orange Park, FL; and Kitty (Barry) Berner of Fairbanks, AK; Brother-in-law Dennis (Kathy) Claveau of Centennial, CO; and sisters-in law, Dorothy Claveau of Hibbing, MN and Virginia Claveau of Duluth, MN; sixteen grandchildren, nine great-grandchildren, and many beloved Nieces, Nephews and Friends.  One of her nephews wrote, "My Aunt Joanie was such a bright star in my life. She didn't just make me happy when I was with her, she made me happy about being me. That is what I still feel when I think of her and will for the rest of my days."

In Lieu of Flowers, the Claveau Family requests donations be made in their Mother Joan’s honor to the Activities Department of the Benedictine Health Center - 935 Kenwood Avenue, Duluth, MN 55811 or the Damiano Center - 206 W 4th St, Duluth, MN 55806.  Cards or other gestures of condolence may be sent to LEE_Attn: Joan Claveau Memorial, 131 E. Winona Street, Duluth, MN  55803.

To send flowers to the family in memory of Joan Theresa (Belshan) Claveau, please visit our flower store.