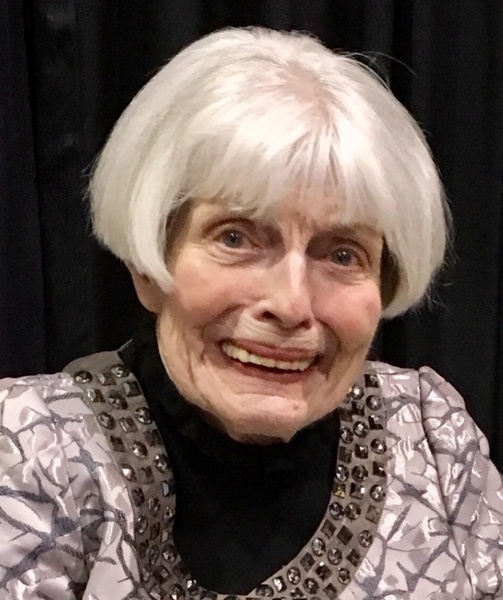 Joan graduated from Central High School and later attended UMD. She fell in love with Dick Hughes, from Cathedral. They married on July 31, 1948. They made their home in Lakeside, where they raised 5 children. Raising the kids, and Dick running the Pure Oil/Union 76 gas station, they still found time to serve others in need and be with friends. Joan was active in a Birthday Club with friends, golf league, volunteering at St. Mary's Auxiliary for 25 years, Little League, Portman Booster Clubs, and Bridge club with her friends.

Joan loved sports and was a true cheerleader for her kids and grandchildren. She was active over the years watching Little League, hockey, football, lacrosse and more. Her involvement ranged from tying on the little ones skates, driving to games and practices, baking for bake sales, or buying lemonade! She and Dick were one of the first to buy season tickets for Bulldogs Hockey, which they never gave up! To the end she would watch the Bulldogs and the Vikings on TV.

Her love of birds, nature, gardening, plants, and water was essential to her well being. She spent many weekends in Iron River, WI at her Mom and Step Dad's summer home. There she would enjoy the lake, feeding turtles and birds, swimming, and relaxing with a pontoon ride.

Very important to her was participating in the Duluth Community Bible Study (CBS). She attended the group for many years, and was a group leader. Only the fear of falling in the winter, finally forced her to stop. Faith was essential to her daily life, along with praying for the needs of others. She always had a smile to share (and a great head of hair!), words of encouragement, along with fresh baked cookies! She was an active member of Lakeside Presbyterian Church, and in later years Lakeview Covenant Church. Later on, she worked at Mount Royal SuperValu, Deli Dept. for 20 years. There she met new people and saw many of her friends and neighbors.

She was preceded in death by her husband Richard, "Dick"; son Richard, "Rick", parents, Myrtle and Roy Carlson, and stepfather, A.C "Cliff" Carlson.

A special thank you to Dr. Paul Sanford/St. Luke's Hospital and the wonderful staff of Ecumen Lakeshore/Fountains/Assisted Living/Memory Care for their compassionate care.

Visitation will be at 10am with service to follow at 11am on Saturday, January 19th at Dougherty Funeral Home, 600 E. 2nd St. Duluth.

To send flowers to the family in memory of Joan Hughes, please visit our flower store.