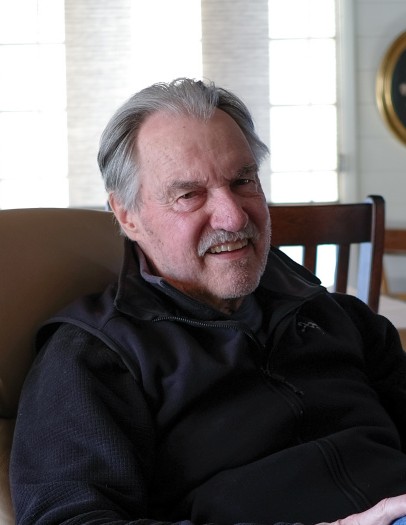 Jerrold M. (Jerry) Peterson, 80, of Duluth passed away on Sunday morning, August 23, 2020, at Marywood in the Benedictine Living Community, with his loving wife, Carol, by his side. His passing ends a long and courageous struggle with Lewy Body Dementia. May he rejoice now in the fullness of life with God and all the angels and saints.

Jerry was born in Minneapolis on January 5, 1940, to Melvin L. and Ruth E. Peterson. When he was 6 years old, his family moved to Lombard, IL. Jerry graduated from Glenbard High School and earned a B.A. in Economics from Knox College. It was there that he met Jory Henwood Henry, and they were married on September 8, 1962. Before attending graduate school, Jerry was a commissioned officer in the U.S. Army for two years, serving one year in Songani, Korea, and another year at the 45th Artillery Brigade Headquarters in Arlington Heights, IL. Upon receiving an honorable discharge, he enrolled at the University of Illinois where he earned an M.A. (1967) and a Ph.D. (1970) in economics, with a minor in finance.

Jerry and Jory moved to Duluth in the summer of 1969, where Jerry joined the Economics faculty at the University of Minnesota Duluth (UMD). Over the years, Jerry authored more than 250 professional articles, books, and other publications. He also directed the Bureau of Business and Economic Research, was instrumental in establishing the Natural Resources Research Institute, served as the Institute’s first acting coordinator in 1984, and taught economics to some 20,000 UMD students before he retired in January 2007.

Jerry and Jory enjoyed traveling as a couple and as a family (with sons Gregory, James, and Matthew). They also loved spending time at their family cabin on Dumbbell Lake in the Superior National Forest. Sadly, Jerry lost his first wife, Jory, to pancreatic cancer in 2002. To face the future with a loving companion by his side, Jerry invited long-time friend and former colleague Carol M. Boyer to join him on his journey. She said “yes,” and they were married on December 17, 2002.

As proud as he was about his many professional accomplishments, Jerry took even greater pride in his family. Today, all three sons are married to strong and talented women and have families of their own. Jerry and Carol are blessed to have nine grandchildren who love listening to Grampa (aka Papa) tell stories about years gone by. Spending time with his grandchildren always warmed Jerry’s heart and lifted his spirits.

Preceding Jerry in death were his parents; his first wife, Jory; and his brothers, Jack and James.

A private memorial service will be held at 11:00 a.m. on Thursday, August 27, at the Dougherty Funeral Home, with a dear friend, Father Seamus Walsh, officiating. Due to Covid-19, a memorial gathering will be held at a later date.

The family would like to extend a special thank you to the nursing staff and Chaplain Liz Liebenstein at Marywood, Dr. David Gish at St. Luke’s, and the staff at St. Luke’s Hospice for their compassionate care of Jerry.

In lieu of flowers, memorials may be sent to the Benedictine Living Community of Duluth Foundation or the Dr. Jerrold M. Peterson Scholarship in Economics at the University of Minnesota Duluth.  Arrangements by Dougherty Funeral Home, 600 E. Second St., Duluth, MN 55805.  (218) 727-3555.

To order memorial trees or send flowers to the family in memory of Jerrold Peterson, please visit our flower store.