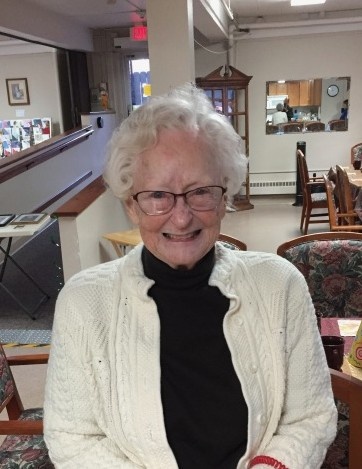 Janet Deneen died on September 27, 2020, at the age of 91 at St. Luke's Hospital in Duluth, Minnesota, following a fall and broken hip.

Janet was born on November 27, 1928, to Beulah (Baldwin) and Keith Glassley in Highland Park, Michigan.  She graduated from Royal Oak High School and married William Deneen, with whom she had three children:  Linda, Cathy, and Greg.  In 1955 Janet and Bill moved to Gaylord, Michigan, where they operated Northwood Resort on Otsego Lake for many years.  Janet worked as a bookkeeper for the resort as well as for a number of area businesses and organizations.   Following her divorce from Bill, Janet made her home with her long-time friend, Shirley Kettlewell, in Gaylord, Michigan.

In 2017, Janet moved to Duluth, Minnesota, where she lived her daughter Linda and son-in-law Gary.  Later that year, she moved to Aftenro Home in Duluth, where she spent the final years of her life.  She loved her life at Aftenro, where she enjoyed the other residents and the caring staff.  Janet will be remembered for her feisty personality, her sense of humor, her love of fun, and her beautiful singing voice.

Janet was preceded in death by her parents, her two sisters, Ann Grocock and Marian Glassley, her ex-husband William Deneen, two of her children, Cathy Deneen and Greg (JoAnn) Deneen, and her friend Shirley Kettlewell.  She is survived by her daughter, Linda (Gary Shute) Deneen, daughter-in-law JoAnn Deneen, granddaughter Sarah (Kurt) Matson, grandson Will Deneen, great-grandson Lucas Matson, and several nieces and nephews.

Janet's family is forever grateful to Aftenro Home for making her final years so happy.  They are also grateful to St. Luke's Hospital and Hospice and to Dr. Rachel Gordon for making her final days safe and comfortable.  There will be no service, but remembrances may be left on the Dougherty Funeral Home web site:  www.doughertyfuneralduluth.com.  Contributions may be made to Aftenro Home, 510 West College St, Duluth, MN 55811 or to St. Luke's Hospice, 220 North 6th Ave East, Duluth, MN 55805.

To send flowers to the family in memory of Janet Deneen, please visit our flower store.