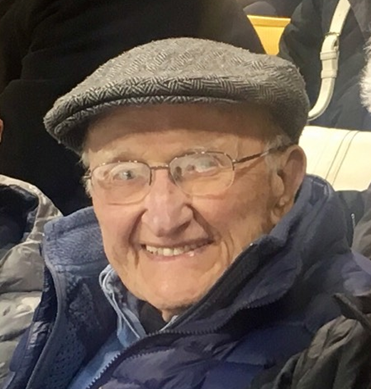 James Alan “Jim” Rectenwald of Duluth MN, passed away on April 8, 2020 with his family by his side. Jim was born in Pittsburgh, Pennsylvania on January 1, 1933 to Catherine (Staub) and Jacob Alphonse Rectenwald. He was proceeded in death by his parents, and sister Norma Piel. Jim is survived by his loving wife of 64 years, Mary Helen (Becker), children David (Nancy), Daniel (Lynne) and Thomas (Wendy) as well as 8 grandchildren, Hayley (Brian) Rasmussen, Nicholas, Joseph, Erich, Christopher, Maria, Elly and Sarah, and great grandchild Grace. He is also survived by his sisters, Mary Jane Lazenga, Theresa Nowalk, Ruth Then, Shirley Warner, and many nieces and nephews; most of whom reside in the Pittsburgh area.

Jim graduated from St Basils High School in 1951 and Duquesne University in 1955, both in Pittsburgh.  He served in the United States Airforce as a pilot.  After the Airforce, Jim returned to Pittsburgh to begin his career with US Steel. He relocated his family to Cleveland OH, before settling in Duluth MN in 1970 to join the Duluth Mesabi & Iron Range Rail Road, retiring in 1992.  Jim loved sports and was an avid golfer, playing frequently at Ridgeview Country Club and Nemadji Golf Course. In his later years he had the good fortune of “shooting his age” on several occasions.  He instilled his passion for sports in his children through his unwavering support in all their endeavors.

He was a long-time parishioner, lector and choir member of the Cathedral of Our Lady of the Rosary, where he and Mary Helen made lasting friendships.  Jim also served as the treasurer of the Serra Club of Duluth and was a member of the National Association of Accountants.

To send flowers to the family in memory of James Alan "Jim" Rectenwald, please visit our flower store.