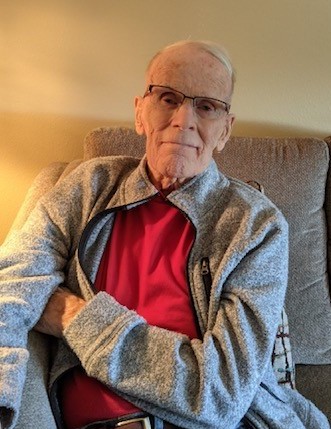 Jack Frestedt, 93, of Hermantown, died Sunday, July 4th at St. Luke’s Hospice, with his family by his side.  Jack was born June 26, 1928, in Duluth to George and Jane Frestedt.  He served in the US Navy in the Pacific Reserve Fleet at the end of WW II.  He met, Alice Honer and they were married on April 11, 1953.  He retired in 1990 as an Engineer with the DMIR Railroad. He was a member of Hillside United Methodist Church, the American Legion, LOL (Lake Ave Loafers); he enjoyed woodworking, maintaining his yard, travel and spending time with family and friends.

He was preceded in death by his parents, George and Jane and his brother William G. Frestedt.

The family wishes to extend a special thank you to the wonderful nursing staff at St. Luke’s Hospice.

To send flowers to the family in memory of Jack Frestedt, please visit our flower store.