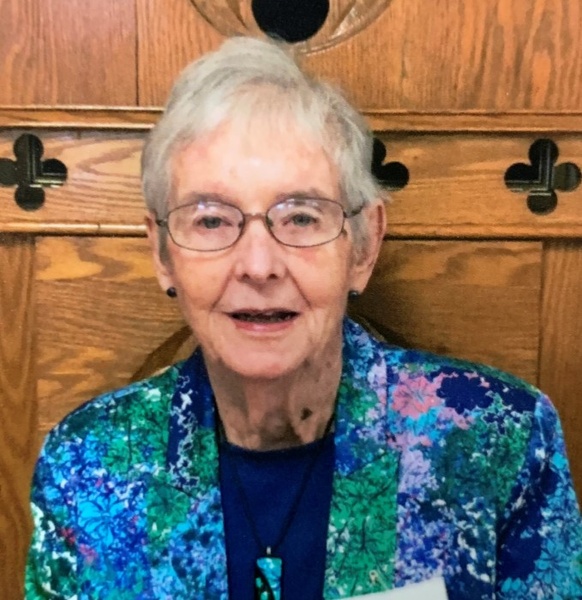 Helen (Bailey) Hanten, 92, of Duluth, former UMD Professor and Deacon at St. Andrews by the Lake, passed away peacefully Thursday, January 2, 2020 at Lakeshore Ecumen, with family by her side. She was ready to meet God. She was born March 19, 1927 in Caspian MI to Carlton and Katherine Bailey. She had 3 siblings, Thelma, Carlton Jr. (Bill) and John (Nick). Helen grew up in the Upper Peninsula and graduated Salutatorian from Stambaugh High School in 1945.

She attended college at UW Madison, where she completed a medical technology program. She moved to Duluth to finish her degree. While in Duluth she met Paul, and they were married in August of 1949.

They celebrated their 70th wedding anniversary last summer. Helen and Paul had three children together, John, Katherine, and Susan. Helen worked at St. Luke’s Hospital when they were first married, and then for a local doctor. In about 1966 she decided to go back to school to become a teacher, and upon graduation was offered a job as a biology instructor at UMD where she stayed for the next 26 years. She earned her master's degree in Botany, and becoming a tenured assistant professor. Helen's passion was teaching, and she loved it almost as much as she loved learning. She never stopped teaching, and she never stopped learning.

During the years Paul and Helen were raising children, they spent many summers in Manitowish Waters WI, followed by 20 years working at and managing Cass Lake Episcopal Church Camp. Finally, they spent about 8 years as campground hosts at Gooseberry State Park, loving every minute of their time there.

Helen began her journey into ministry when an Episcopalian priest told her the church was starting to look at environmental responsibility as a Christian issue. The idea was, that the Creation was God's gift, and we are left to care about it, and to care for it. Helen was excited, because her two biggest beliefs were merging! The Church as God's hands and feet on Earth, and the reverence for the Earth and all of creation! On October 25, 1987, Helen was ordained a deacon in the Episcopal Church, the same day her beloved Minnesota Twins won the World Series! Helen would serve as a deacon at St. Andrews by the Lake Episcopal Church for the next 20 years, with her focus on pastoral care, education, and the environment. In 1993 she was appointed to the MN Episcopal Environmental Stewardship Commission (MEESC), which focused on environmental issues, bringing them to the attention of the church. This commission also led to the formation of an environmental retreat center, the Mary Brown House, in Ely MN. Helen was an integral part of that center for about 20 years.

Helen and Paul got bit by a travel bug in 1979 with a trip to Switzerland, a gift from Paul's mother. In Helen's words they became addicted to good wine, good cheese, and good chocolate. Over the next 35 years they traveled the globe, to Thailand, New Zealand, China, Norway, Greece, Turkey, Israel, Alaska, Hawaii and England, not to mention countless trips camping in the BWCA.

Helen retired from UMD in 1992, but continued to attend and teach at elder hostels and the University for Seniors, focusing on her passion, Ecology. She was active in AAUW, League of Women Voters, several book clubs, and bridge at The Pines. One of the biggest joys in her life was her friendship with a group of Earth angels, her Tenfold Group. They met monthly for over 27 years, growing spiritually together with purpose, their focus being the stewardship of our planet. Helen always asked herself, "What are we here for? Why?" She lived her life seeking answers to those questions, by being rooted in God, and dedicating herself to the service of others.

To send flowers to the family in memory of Helen Hanten, please visit our flower store.