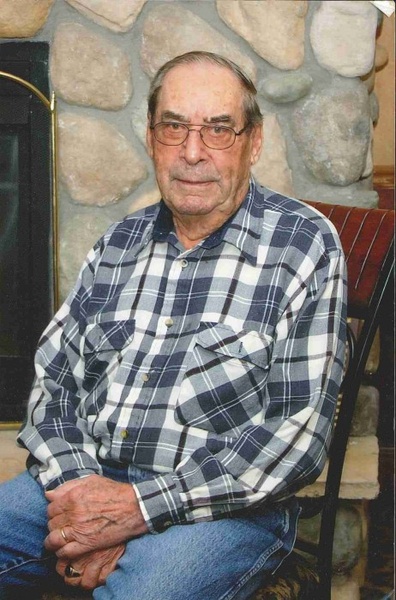 Harvey Stolt went peacefully home to heaven on November 11, 2019.  He was born August 27, 1922 in Nicollet, Minnesota. He married his wife, Garnette, in 1944 and they established a successful farm in 1946 near Winthrop, Minnesota. They were active in the Bernadotte Lutheran Church and the community. He obtained his pilot’s license and enjoyed the adventure of flying to visit family around the state while also getting home in time to milk the cows.

He retired in 1977 and moved to a red house just south of Lake of the Woods near Baudette, Minnesota. There he enjoyed retirement and was an active fisherman, hunter, and helped to build – physically and spiritually – the Wabanica Lutheran Church. He and Garnette moved to Duluth, Minnesota in 2009 to be close to their beloved daughter, Marjorie. They celebrated their 70th wedding anniversary in 2014.

He was a man of few words who loved deeply and valued hard work. He was equal parts stoic and strong, kind and faithful. His was a life well lived.

A celebration of life service will be held at the Wabanica Lutheran Church in Baudette, Minnesota at a later date.

To send flowers to the family in memory of Harvey Stolt, please visit our flower store.