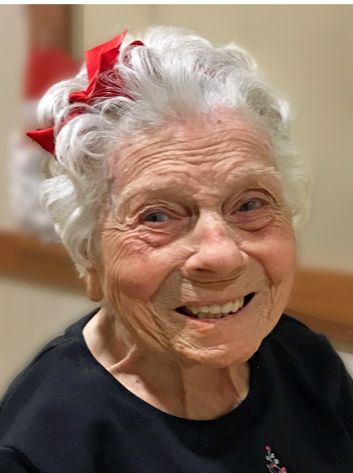 Grace A. (Carollo) Samuelian, age 94, formerly of Warwick, RI, passed away on Sunday, April 19, 2020, at the Benedictine Living Community in Duluth.  She was the wife of the late Leon Samuelian; they were married for 64 years.  She lived in Warwick for most of her life before moving to Duluth  in November 2014, to be close to her daughter.

Grace was a loving mother and grandmother, and she enjoyed family gatherings and activities.  She is survived by her daughter, Janice A. Shuey (Thomas) of Duluth; two sons, Leon P. Samuelian (Margaret) of Warwick and Steven F. Samuelian (Kristin) of Fairfax Station, VA; four grandchildren, Megan Armstrong, Amanda Samuelian, Nicholas Samuelian, and Maia Samuelian; and a brother, Anthony Carollo of Harrisville, RI.  She was the sister of the late Joseph Carollo and Frank Carollo.

The family would like to thank the staff of Cliff Rock at Marywood and other special staff at the Benedictine Living Community for the kind, compassionate, and loving care they provided Grace over these past five and a half years.

Her funeral and burial will be private.

A Memorial Service will be planned for a future date.

To order memorial trees or send flowers to the family in memory of Grace A. Samuelian, please visit our flower store.