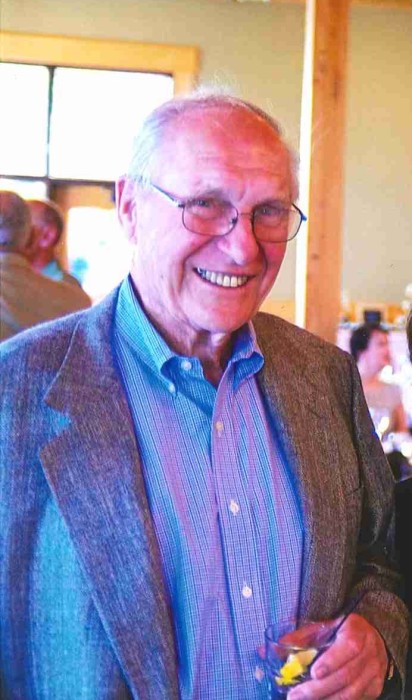 Gordy was born February 23, 1929 in Duluth to John and Virginia (Roedter) Seitz.

Upon graduation from Duluth Central High School in 1947 he enrolled at the University of Minnesota, Duluth. While at UMD he was a member of the inaugural Bulldog hockey team from 1947-50 before being stationed in Germany during the Korean War.

After serving overseas, he returned to Duluth and married Elizabeth (Betsy) Haley on July 31, 1954. They were married for 61 years before Betsy's death in 2015.

Gordy was an entrepreneur in the truest sense of the word. He began Northern Engine & Supply Inc. in 1953. In the following years he moved to Lewiston, NY with his young family and set up a trailer to sell parts for the Niagara Power Project. He returned to Duluth and expanded Northern Engine to six locations: Duluth, Virginia, Proctor, Fargo ND, and Gillette WY, employing over 40 full time employees. All those that worked with him were amazed at his phenomenal memory and ability to recall part numbers, prices, and locations for even the smallest items. Gordy had a very special relationship with his employees and customers and truly felt that they were extended family members.

A lifetime of hard work enabled Gordy and Betsy to give back to the local community in many ways. Organizations like the Great Lakes Aquarium, Depot Foundation, Wolf Ridge Learning Center, Women’s Care Center and Boys and Girls Club were favorites of theirs. But the love of hockey proved to be a strong influence. The recognition that the youth of Duluth needed more indoor recreation area afforded them the opportunity to fund the Seitz Arena in the Heritage Center.

Gordy's first passion was his work, but when not at the office you could find him on the golf course where he was a longtime member of Northland and Ridgeview Country Clubs, attending MN Vikings football and UMD hockey games (where he was a long time season ticket holder) or the cabin on Rose Lake with a bottle of WD40 in his hand. He was blessed with many great friends throughout his life and enjoyed all the good times they shared.

He was preceded in death by his parents; wife Betsy; daughter, Martha McDaniel and grandson, Daniel King.

The family would like to thank the employees at Marywood. A special thank you to Danielle, McKenzie, and others who treated Dad with such love and respect. For that we will be forever grateful.

A service for family at Dougherty Funeral Home is scheduled for Friday, April 24 officiated by Fr Brandon Morovitz. A celebration of life is to be scheduled at a later date.

To send flowers to the family in memory of Gordy W. "Gordy" Seitz, please visit our flower store.