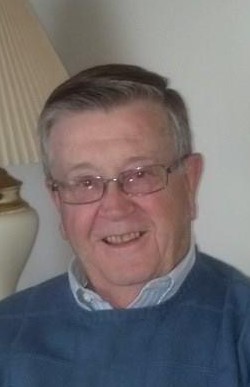 Glenn L. Harris, 85, of Duluth died on January 2, 2021 from COVID-19.  He was born October 18, 1935, in Hewitt, Minnesota, the youngest child of Charles E. Harris and Florence (Carter) Harris.  He graduated with the last class of Hewitt High School in 1953, serving as class president and captain of the basketball team.  After briefly covering his father’s rural mail route, Glenn relocated to Northeastern Minnesota, where he started his career as an electrician, wiring homes in the new city of Silver Bay.  While there, he met his future wife, Gerry Williams, who was working as a secretary for Reserve Mining.

In 1958, Glenn was drafted into the U.S. Army, and stationed at Fort Lewis, Washington, attaining the rank of Specialist-4.  Upon his discharge in 1960, Glenn returned to Minnesota and married Gerry in June 1961.  The couple settled in Two Harbors, so Glenn could work and attend vocational school in Duluth.  Glenn became a journeyman with IBEW Local 242, working for Electric Construction Company on many projects in the Duluth area, including several on the UMD campus.  In 1967, Glenn and Gerry had their only child, Dale.  The family moved to the Woodland neighborhood of Duluth in 1969, where Glenn and Gerry lived until 2019.

After ECC dissolved in the early 1980s, Glenn started working for UMD Plant Services, which specifically requested him due to his extensive knowledge of the campus buildings.  He retired in 2000 as the electrical shop foreman.  He was an active member of Glen Avon Presbyterian Church, an avid fan of UMD hockey, a regular attendee at IBEW Retirees’ functions, and a fixture at any of his grandchildren’s activities.  Glenn personified honesty, hard work, and dedication to family.

He is preceded in death by his parents; sister, Marjorie and brothers, Mervin, Lauren, and Ivan.  He is survived by his wife of 59 years, Gerry; son, Dale (Barbara) Harris of Hermantown; sister; Marie (Roger) Folkestad of Wadena; grandchildren, Kevin of Annapolis, Maryland, A.J. of Minneapolis, Josie and Zach of Hermantown; his loyal dog, Kasey; and many nieces, nephews, and friends.

A memorial service will be held at Glen Avon Presbyterian Church on January 23, 2021 at 2:00 p.m.  Due to COVID-19, in-person attendance will be limited to immediate family, but will be live-streamed on the internet.

To send flowers to the family in memory of Glenn Harris, please visit our flower store.