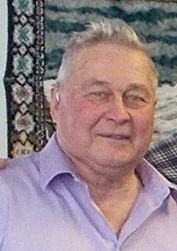 Former Fairbanks resident Gerrit N. Vandenberg, 84, went home to be with his Lord and Savior, on August 8, 2021, in Mansfield, Texas. He was born May 15, 1937, in Pine City, Minnesota, near Duluth His parents were Gerrit "Jerry" Van- denberg, Sr. and Sylvia (Turpanon) Vandenberg. Gerrit, known to many as "Gary", was raised in the Duluth area, and attended elementary school and high school there.

He met his future wife, Merdita Arlene Thompson, at a Billy Graham Crusade. Gary came to Alaska to work. Merdita came to Alaska from her home in Kansas City, Kansas, by Greyhound bus to marry Gerrit February 17, 1970, at the Fox Chapel, just outside Fairbanks. They settled in the North Pole area for many years, where they raised two children: Gerrit Dean and Sherry Lynn. Later they bought property on the Chatanika River, at 11 mile El- liott Highway, where Gerrit built a home, overlooking the river, to live in. He built a second home later nearby, and moved there.

Gerrit worked in the construction industry, and soon began his own construction company, Gerrit & Company. He was a very industrious and generous man. His company build many new homes in North Pole and Fairbanks. His company also did lath, plastering, and stucco, on many commercial, residential, and industrial buildings all over Alaska. In the Fairbanks area the company did Weller School, the Golden Valley building, the Missile Defense site, North Pole Christian School and the Fox Chapel, to name a few. He also worked in Juneau, Ketchikan, Kenai, Soldotna, the North Slope and many other Alaskan cities.

He was also an avid hunter. He holds a Boone & Crockett record for an Alaskan brown bear, taken in Cape Lisburn, while he was working there. The bear hung on their home wall for a long time!

When Gerrit's children reached school age, he wanted them to attend a Christian school. He decided to build one. He founded the North Pole Christian School in 1982, locating it on the corner of Silverleaf Avenue and Newby Road. A school board was chosen, and local Alaskan and lower 48 applicants were chosen as staff, to administer classes from Day-care, and Kindergarten through high school. The school is now located on Badger Road. It will be celebrating its 40th anniversary next summer, 2022.

Gerrit and his family fellowshipped at the Fox Grace and Truth Chapel, for many years, as well as with a North Pole group that met in their home. Gerrit actively shared his Christian faith with the many people he met through his construction business. He was well-known for his honesty and quality work. His wife Merdita was his business 'partner', working quietly behind the scenes, keeping records, running errands, and making sure things ran smoothly. She also kept a home that was known for its hospitality.

Gerrit is survived by his daughter, Sherry Lynn (Shawn) Taylor, and his granddaughter, Kiera M. Taylor, of Mansfield, Texas, a brother Michael (Geraldine) Vandenberg, of Duluth, Minnesota, and several nieces and nephews. He was preceded in death by his wife Merdita, their son Gerrit Dean, and his second wife, Carol Vandenberg, his parents, and two brothers, Joel (Hazel), and Douglas (Karen) Vandenberg, of Duluth.

Arrangements will be by Dougherty Funeral Home of Duluth, Minnesota, 218-727-3555, please visit www.dfhduluth.com to sign the online guestbook.

To send flowers to the family in memory of GERRIT VANDENBERG, please visit our flower store.