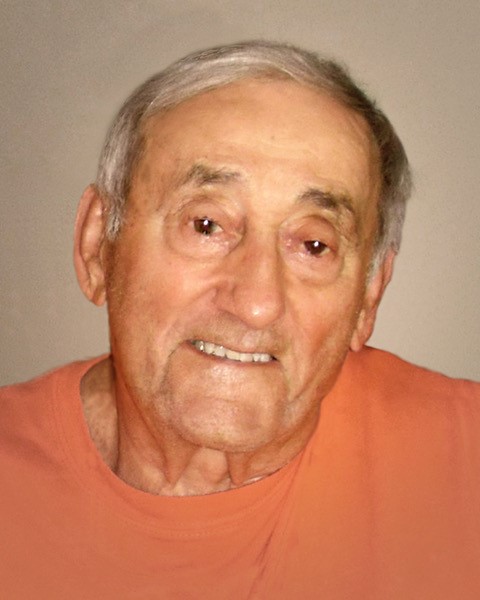 George E. Petrich, after 94 years of a life well-lived, passed away peacefully on Sunday, March 15, 2020 surrounded by his family. He was a life-long resident of Duluth.

George was born on July 4, 1925 in Duluth, MN. A 1942 graduate of Morgan Park High School, he received his teaching degree from the University of Minnesota, Duluth in 1948. On December 29, 1950, he married Kathryn Griak. They raised two sons, Steve and Bill; and a daughter, Patti. He was an extremely humble WWll combat veteran, flying over 40 missions in Europe from 1943-1945. After retiring from teaching at age 58, he continued to enjoy life and family to the fullest.

His entire teaching career was at Hermantown High School, where he taught physical education, math, science, and coached football and track. There, he also served as Athletic Director until his retirement in 1984. In 2011, George was inducted into the Hermantown Football Hall of Fame. He was also instrumental in starting the Hermantown Boys Hockey program.

George will be fondly remembered by family and friends as a loving husband and father,
teacher, coach, an outdoor enthusiast who loved to downhill ski at Spirit Mountain and cross country ski, hunt and fish.

During his summers, he designed and built homes, garages and decks in the Duluth area and loved to spend time with his family at his cabin on Crane Lake. He loved all
animals and the great outdoors. Always interested in what others were doing, and always asking questions, he was man who could do anything he set his mind to – truly an inspiration to all who knew him.

The family would like to extend their heartfelt thanks and appreciation to all the staff at St. Benedictine Living Community in Duluth, MN and the NC Little Hospice in Edina, MN for the exceptional care they provided for George.

A private family funeral service will be held on Saturday March 21, 2020 at the St. George Serbian Orthodox Church. Interment at Oneota Cemetery.  A gathering of family and friends will be held at a later date.  Memorials will be donated by the family, as George wished. Memorials and condolences may be sent to Patti Petrich 1788 Scheffer Avenue, St. Paul, MN 55116.  Arrangements by Dougherty Funeral Home. 600 e. 2ND St. Duluth, MN 55805.  218-727-3555.

To order memorial trees or send flowers to the family in memory of George Petrich, please visit our flower store.