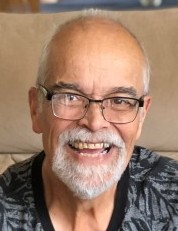 George Thomas LaTour, 70, died July 30, 2019 at home in Fredenberg Township, MN surrounded by his family.  George was born in Duluth, MN on May 12, 1949 to Paul and Isabelle (Haller) LaTour.  He was a lifelong resident of Duluth and for the past five years wintered in Davenport, FL.

He was a Vietnam veteran who proudly served his country in the US Air Force as C130 crew chief from 1968-1972.  After his years in the service, George went on to work for 40 years for The Great Lakes Towing Company as a tugboat captain in the Duluth harbor and retired in 2015.

He is preceded in death by his parents, brother & sister-in-law, Joe & Judy LaTour and his granddaughter, Brielle Haburt.

A special thank-you to Bill Staubs and the other wonderful employees at Essentia Health Hospice in Duluth for the great care you gave to George these past three months.

We will forever miss the smile on your face and the twinkle in your eyes.  Enjoy all the time playing with your furry friends.

A private memorial will be held at a later date at the Minnesota State Veterans Cemetery in Duluth, MN.

To send flowers to the family in memory of George LaTour, please visit our flower store.