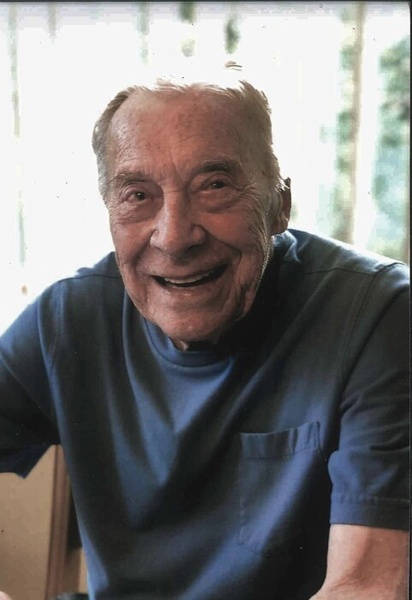 George Anderson, 104, died peacefully on December 25th in Duluth, MN. Born May 2, 1916 to Einar and Alvilda Anderson, George was raised during the Great Depression and as a teen worked on the WPA and caddied at Ridgeview Golf Course to assist him family in buying a home.

George served in WWII as a supply sergeant for the 531st Amphibious Engineer’s Unit. George fought in multiple major amphibious landings in the European theater, including Operation Torch, the invasion of Sicily, landings in Italy, and Normandy where he fought at Utah Beach. Serving as a combat engineer, his regiment often was the first to land and ensured the demolition of enemy fortifications along with building supply roads.

Returning home from war, George immediately married the LOVE of his life, Marguerite. Their daughter, Julie, was born in 1946. George served as a USPS Letter Carrier for over 30 years and often reminisced about adventures he had while delivering mail. His most exciting story being the rescue of two children from a burning home in Lakeside. Last year George was given a plaque by the National Association of Letter Carriers for having been a member for 80 years.

In retirement, George focused on his love of carpentry. He built his own cabin on Schultz Lake and helped build his daughter’s house on Park Point. He did not lay down his tools until well into his 90’s.

George stayed young and active, even in his 80’s and 90’s by golfing, having a weekly breakfast date at Brigdgeman’s with family and friends, and staying busy with the activities of his grand and great grandchildren. George enjoyed a donut and a cup of coffee or telling stories and arguing politics over a stiff martini. Never shying away from learning new things, George bought his first computer at age 83 and started emailing to stay in touch with loved ones. He always believed that his long life was attributed to his contentment.

George lived a rich, fulfilling life and will be greatly missed by his family, friends, and the community. He is survived by his daughter Julie; his grandchildren Andy (Tammy), Sarah (Al), Betsy (Robert), and his great-grandchildren, William, Jack, Finley, George, Emily, & George. George also leaves behind his best friend, Murphy, Tracy Pet Rescue extraordinaire.  He is preceded in death by his parents Einar and Alvilda, his beloved Marguerite, his brother Robert, and his son-in-law Bill.

To send flowers to the family in memory of George Anderson, please visit our flower store.