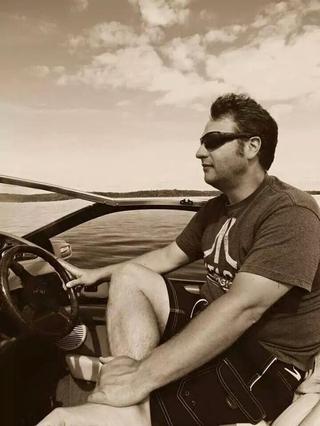 Gayle’s personality was larger than life. He filled every room he walked into with joy and laughter and he had the ability to see something in you that no one else saw and make you feel like the most important person in the world.

Gayle was fiercely loyal and devoted to family, friends, the Minnesota Vikings, boating and his dog Cooper.

His true passion was in being a police officer. He received his Bachelor degree in Criminology from the University of Minnesota Duluth and joined the Duluth Police Department in 1998 rising to the rank of sergeant. He was a member of the Tactical Response Team, Peer Support, sat on the union board, was a founding member of the Duluth Police Foundation, reinstated and supervised the Juvenile Bureau, was a member of the Fraternal Order of Police Officers and served with integrity, honesty, grace and honor.

He was preceded in death by his father George Chester Holton and his mother Sharon Renee Johnson.

Gayle’s life was a gift to all that knew him. His spirit will live on and in the immortal words of Frank Sinatra:

For what is a man, what has he got? If not himself, then he has naught, to say the things he truly feels and not the words of one who kneels. The record shows, I took the blows and did it my way.”

Skol to you our dear sweet brother.

To order memorial trees or send flowers to the family in memory of Gayle Holton, please visit our flower store.