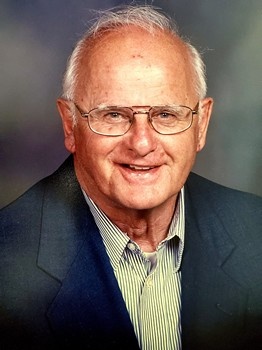 Frank Couture, age 93 of Duluth, MN passed away on July 16, 2019 at St. Therese, New Hope, MN..  Frank is survived by his wife of 61 years, Marie Couture, his daughter Catherine Moulton Couture (Jeff), his son Steve (Evie), and his sisters Lorraine Cournoyer (Dick), Adrianne Manta (Ronnie), his extended family, including John, Debbie, Sammie, and Rebecca Lepak , and many nieces and nephews.  Frank was preceded in death by his parents, Theodore and Rose, his bothers Clarence Sr. (Leonia), Theodore, and Gerald (Phyllis), and his sister Marguerite Genereau (Dell).

Frank married the love of his life, Marie Finco, on May 17, 1958. They had two children, Catherine and Steve.  Frank was a loving and caring husband and father and a devout Catholic.

Frank was born on November 27, 1925 in Duluth, MN.  At age four, Frank suffered from polio and he was treated at Gillette Children’s home in St. Paul and at St Lukes in Duluth.  He lived with the effects of some paralyzed muscles throughout his life.

While going to high school, Frank worked for Frazer Shipyards in Superior, WI, where he worked long hours covering pipes with asbestos.  Frank graduated from Duluth Cathedral High School in 1944.  In 1948, Frank earned a degree in Accounting from the Minneapolis Academy of Accountancy.

Frank served in the United States Army in Korea before the Korean War and received the World War II Victory Medal and Army of Occupation medals.

After serving in the Army, Frank began his career in painting.  He started working for St. Paul Statuary Company, painting large Catholic Churches.  Frank went on to work as one of the sons for T.J. Couture and Sons painting, and later started his own business as Couture Bros painting.  Frank did all kinds of painting and sandblasting, but he had a passion for painting churches.  Over the years he painted and decorated many churches of different denominations.  Frank was best known for painting the St. Mary’s Star of the Sea Church steeple and interior several times.

Frank was a member of the Painting and Decorating Contractors of America and Local 101 Painters Union for more than 60 years.  He was also a member of the Serra Club, the Knights of Columbus, Veterans of Foreign Wars, and American Legion.

Frank was an active member of the Cathedral of Our Lady of the Rosary throughout his life.  He served as an usher and handed out bulletins at Sunday mass.  He supported a family in India for 50 years with the Save a Family Plan organization.

VISITATION:   Sunday, July 21st from 3-5 PM with rosary prayers at 4:30 PM at Dougherty Funeral Home.  Visitation continues Monday, July 22nd. from 10-11 AM, followed at 11 AM by the Mass of Christian Burial at the Cathedral of Our Lady of the Rosary at 2801 E 4th Street.  Burial will be at Calvary Cemetery with Military Honors accorded by the Duluth Honor Guard.    Arrangements by Dougherty Funeral Home, 600 E. Second St., Duluth, 218-727-3555.

To send flowers to the family in memory of Francis Couture, please visit our flower store.