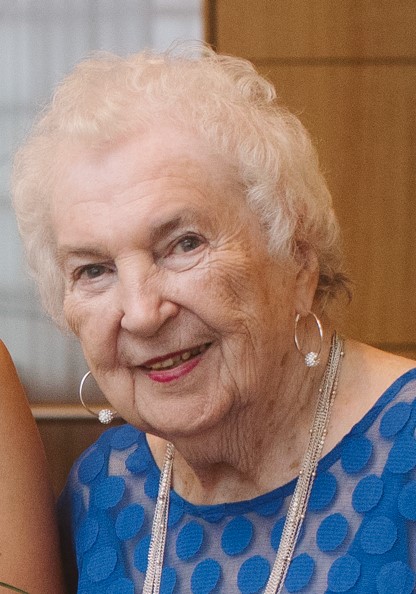 Evie danced her way through life changing the steps of the dance as her life changed.  Evie was born December 13, 1925 to Victor and Laura Hill.  She grew up outside of St. Wendel, MN on the family farm with her brother Bill.  She took dance lessons as a young girl and found a passion.  Evie danced and sang at various town, county, and larger shows.

Before she graduated from Holdingford High School, she transferred to St. Benedicts Academy and completed her high school courses there.  Next was attending the St Cloud School of Nursing where she graduated as a Registered Nurse.

Evie had a variety of positions starting as a dance instructor, a weekly radio program on KFAM, postal employee and after graduation from the nursing program she first worked at the St. Could Hospital.  After a short time, she went on her adventure with her good friend and worked as a nurse in Brownsville TX.  She next moved to San Francisco CA and worked as a dance instructor, choreographer and accompanist.  She came back to MN and worked at Ah-Gwah-Ching Hospital near Walker, MN.  Soon after she moved back to St. Cloud where she worked at the St. Cloud Hospital, she took some time off to be a Mom and then started work at Assumption Nursing Home in 1965 until retiring.

Evie met Roman Zenner at a dance while still in nursing training.  She captured his heart and after her trips to TX and CA they married on October 22, 1949.  Evie had 5 children: Mark, Guy, Dane, Daniele and Blaze.

To order memorial trees or send flowers to the family in memory of Evelyn Zenner, please visit our flower store.