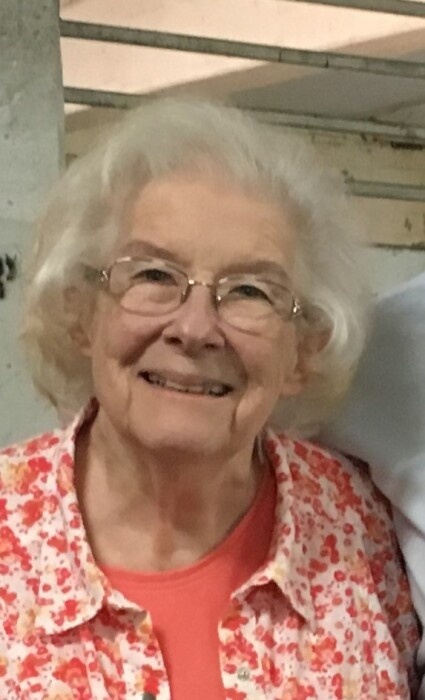 She met Glen Loyear when he was in the Navy.  A family story we love is that Dad didn't re-enlist in the Navy because he fell in love with Mom. He went home to Duluth knowing he and Mom would marry in the Fall, but he missed Ellie too much, so he borrowed a friend’s car to drive to Connecticut with his favorite sister Joanne. They drove for days over the rough roads of the time without stopping, taking turns driving, and as the story goes, waking up to find themselves up a side road or one time literally driving off into a cornfield and waking up bumping through the corn rows. We always said God must have been watching over them because they finally got there.

The other funny thing was that Mom didn't even know they were coming! She only found out from a surprising call from Glen's Mom trying to find out if he were there yet. Mom couldn't take the call because she was on the switchboard working at Bell Telephone in Hartford and quickly pulled it down because a supervisor was always looking on. But of course, Irma called back, she thought she’d gotten cut off and the supervisor handed Ellie the call!

Sadly, for Dad, our Mom, always being the practical one, said, No, she had to give notice and pack up her things. So, Dad drove back to Duluth without her, sad, but happy knowing Mom was really planning to take the train to Duluth soon for the wedding. And so, they were married on Sept. 20, 1952 with Auntie Jo as the Maid of Honor and the Best Man, Steve Skorich, called away that day for the birth of his first daughter, Diane.

Ellie was a member of the 1 st United Methodist Church and a wonderful couples club, where she and our Dad made many friends. Ellie and Glen were also very active in the West Duluth Moose 1478 Service Fraternity. Where Ellie became Senior Regent and Glen became Governor. They worked very hard to make the Club successful, Mom cooking dinners and Dad cooking breakfasts and organizing and working on many charity events for Special Olympics and many other events for children including the Cystic Fibrosis Foundation.

Ellie was also in the Cystic Fibrosis Foundation group in Duluth where she became Chairwoman and organized many events with Glen, including the CF Family Fun Day that was a big hit in Duluth. She was proud to represent parents of CF children at the National Convention one year and became something of an amateur medical expert on the subject, speaking to nursing students several times and being asked to speak to new parents at the hospitals. Mom and Dad's hearts broke when 11-year-old Gail died from CF, but they continued to work to raise funds for a cure to help other little children.

Mom was friendly and very bright and giving and she liked everyone. She loved to talk and visit and always cheered people up because she was a person who was delighted to speak with you and help you in any way she could. She remembered everything. If we drove by customers' homes from 40 years ago, she'd remember how many kids they had and what kind of a loss they'd had. This came in handy when she volunteered at St. Luke’s Hospital for 10 years after Dad died. She so enjoyed meeting old neighbors and friends and their families and getting to catch up. She continued to make new friends right up until the end at Edgewood Vista.

One more set of memories and a pillar in her story. Ellie was a child of the depression and World War II. She had the work ethic and family connections developed through hardship and perseverance and sticking together to get by in those days.

Her Grandmother and Grandfather Stewart took her and her Mom and brother John in after her father John Painter died when Mom was only two. They also took in other members of the family and their spouses and their children until 17 family members were all together in the big house. The neighbors called it the “bee hive” because people were coming and going all day long!

The Family lived by working together to get by. Grandpa Stewart was a painter and had the only phone in the neighborhood, selling calls for a few cents each. And he still got some jobs from people who could afford to paint their homes. Everyone else contributed what they could. Everyone including the kids had their chores in the house or garden or with the chickens and cow. Our Mom learned family responsibility from the older relatives and played and went to school with her cousins. Even though it was the Depression it sounded like a wonderful life from all our Mom's stories. This work ethic defined that generation and we felt that through our own lives with our Mom and Dad. They were good caring hard-working people who took their responsibilities seriously.

Our Mom worked her whole life and when Joanne and Glen were born also took care of the family at home working long solid workdays and feeding us, keeping the house and the garden, while still helping others, and doing the business booking keeping late into the night with Dad and then added caring for Gail with CF and the new baby John.

She showed she loved us by making us mind and eat all our vegetables and making sure we knew that God would be disappointed in us if we did wrong. She was very strict with the older kids and only relaxed on the younger ones when Gail and John came along. She didn't say I love you much. She told us in our Birthday cards, Love, Mom. But she hugged us and put on the Band-Aids and made us cookies and let us play outside until dinner time and the streetlights came on and we all went on vacation most Augusts and went to visit Grandma and Grandpa and Aunts and Uncles and Cousins, where we saw lots of petting zoos and fairs, had picnics, set off fireworks, went to the beach. We said, I love you, Mom, on Birthday and Mother's Day cards and I love you, and Thank you at Christmas for all our presents. It was only in later years that we gave the hugs and the kisses and said I love you every time.

Now we will have to say it to you in heaven Mom, but we will always say we love you every time we talk and will always know how much you loved us too.

Goodbye for now Momma. We know, with God's grace, we will all be together again someday.

Private service will be held at Dougherty’s Funeral Home and celebration of life at a later date.  Arrangement by Dougherty Funeral home, 600 E 2 nd St. Duluth, MN, (218) 727-3555. Contributions to the Cystic Fibrosis Foundation.

To send flowers to the family in memory of Eleanor "Ellie" Loyear, please visit our flower store.