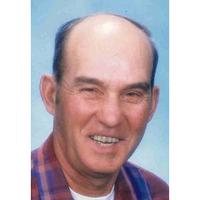 Edward Joseph Tremblay, 89, of Culver, died Saturday, June 15, 2019 at the Benedictine Living Community. He was born in Alborn, MN on November 21, 1929 to Louis and Marie (Edwards) Tremblay. Ed was a graduate of Alborn High School. He was an Army veteran of the Korean War. Ed was a Heavy Equipment Operator for E. W. Coon Co., Ulland Brothers Inc. and other companies in Minnesota, retiring in 1991 after 38 years. He was a member of International Union of Operating Engineers, Local #49, the Modern Woodsmen of America and the Cloquet VFW, Post 3979. Ed was preceded in death by his parents, his wife Claudette on June 2, 2015, and his brothers Leonard and Joseph. He is survived by his sisters Regis Halgren of Duluth and Mary Reifsnider of Beaver Dam, WI; and several nieces and nephews. VISITATION: Saturday, July 13, 2019 from 10 AM until the 11 AM Memorial Service at Dougherty Funeral Home. Inurnment will be at Calvary Cemetery. Arrangements by Dougherty Funeral Home, 600 E. Second St., Duluth, 218-727-3555.

To send flowers to the family in memory of Edward Tremblay, please visit our flower store.