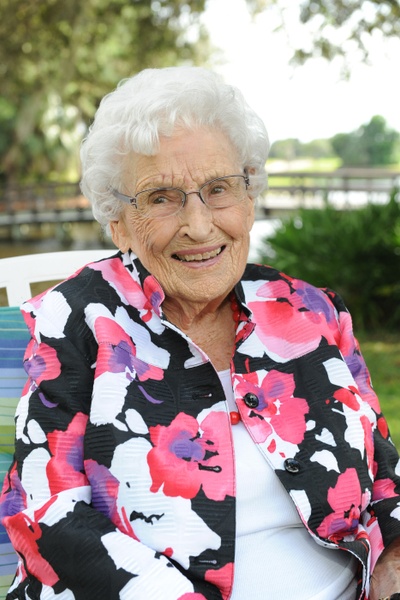 Edith (Gustafson) Stapleton died peacefully on June 4, 2020 after a life well lived for 104 years. Edith was born to humble beginnings on a farm in Clover Valley, MN in 1915. She was the youngest of five children whose birth was in a log house, to loving Swedish immigrant parents who believed in hard work and the American dream.

Edith was educated in a one room grade school in Clover Valley and graduated from Clover Valley High School at the top of her class in 1933 as one of 15 students.

Throughout her life, Edith passed down stories of her early childhood, always including the one of her riding on their horse all day long while her father walked behind plowing the fields. She was chosen because she was the smallest in the family.

After high school she moved to Duluth and worked for various families as a cook and nanny. While living in Duluth she met her husband of 50 years, Gene Stapleton, whom she married in 1941. They had two children Marty and Maureen.

Edith was an industrious person so, as she raised her family, she had several jobs retiring as attendance secretary at Cathedral High School (now Marshall High School).

Following her retirement she and Gene moved to Sarasota, FL but continued to spend their summers in Duluth. Edith always found time to give back to others volunteering for Meals on Wheels and at the Benedictine Health Center.

In Sarasota, where she lived until her death, Edith enjoyed entertaining her many friends, playing golf and exercising with the mermaids. Following the death of her husband Gene she decided she needed something to keep her busy on the weekends so at the age of 80 she decided to go back to work on Saturdays passing out product samples in the various Publix Grocery Stores in the Sarasota area.

To send flowers to the family in memory of Edith Stapleton, please visit our flower store.