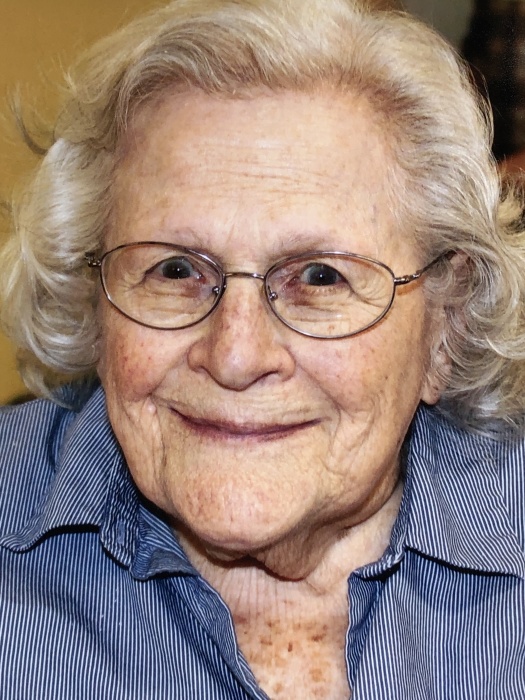 Dorothy Hoffman Slonim, age 97, of Duluth, died Saturday, May 25, 2019 at the Benedictine Health Center.  She was born October 12, 1921 in El Paso, TX to Harry and Sara (Aronson) Hoffman.  Dorothy grew up in Des Moines, Iowa and attended Drake University where she received a two-year teaching degree and then taught elementary school prior to her marriage.  Dorothy married Edward E. Slonim in 1946 in Des Moines and moved to Duluth where she resided the rest of her life.  Dorothy served as treasurer of the Temple Emanuel Sisterhood and she was also a Sunday school teacher for several years at Temple.  Dorothy was a member of InvestorMrs. where she also served as treasurer.  She loved playing Duplicate Bridge and attained the rank of Life Master. Although Dorothy never drove a car, she was a frequent bus rider and constant patron of the Duluth Public Library as she was an avid reader.  Dorothy was the quintessential hockey mom and she and her husband Ed were Bulldog Hockey season ticket holders and devoted fans for over 50 years. Dorothy was preceded in death by her parents, husband Ed, son Marc, sister and brother-in-law Alicia and Ben Witten, grandsons Adam and Reid, niece Shelly Witten Little and sister-in-law Ruth Slonim.  Dorothy is survived by her sons:  Alan of Wayzata, MN., Lynn (Camille) of Las Vegas, NV., and John (June) of Cincinnati, OH; grandchildren Curt, Aaron, Josh and Jess; great-grandchildren Sawyer, Cooper, Endsley, Jackson and Cameron.  FUNERAL SERVICE: Thursday, May 30, 2019 at 11 AM at Temple Israel Synagogue, 1602 E. 2nd. St., Duluth.  Burial will follow at Temple Emanuel Cemetery.  In lieu of flowers, memorials may be directed to the UMD Sigmund and Lena Slonim Scholarship Fund (#1907). University of Minnesota Foundation, PO Box 860266, Minneapolis, MN 55846, https://makingagift.umn.edu/give/fund.html?id=1907.  Arrangements by Dougherty Funeral Home, Duluth, 218-727-3555

To order memorial trees or send flowers to the family in memory of Dorothy Slonim, please visit our flower store.