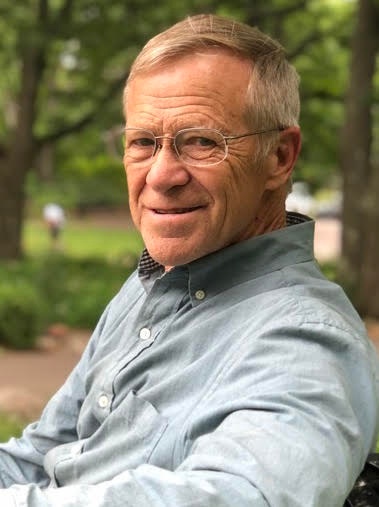 David Lyn Miller passed away in Duluth on September 15, 2020. He was born in Liverpool, England, in 1945. After World War II, his father and British mother settled on the Miller family homestead in Sioux Valley, MN. Famous for singing at County Fairs and showing champion sheep, Dave always cherished his southern Minnesota roots.

After college and graduate school, he found his lifelong partner, Pat, whom he married in 1970. Moving to Duluth in 1975, David became a writer for Minnesota Power and started a family, raising two boys Jason and Zach.

To say Dave was a recreational enthusiast would be an understatement. His relationships with family and friends revolved around the many activities he enjoyed: skiing, mountain biking, hiking, tennis, volleyball, ping pong, birding and more. Indoors, he was often wrangling up a game of Scrabble or cribbage.

Another passion was music. He filled the house with his tenor voice and acoustic guitar. He performed with the easy listening group, the Downbeats, for most of the past 40 years, in addition to singing with the DSSO Symphony Chorus for several years.

Throughout their lives together, Pat and Dave loved traveling to National Parks and other places of natural beauty.

His easy laugh, up-for-anything attitude, lightning fast wit and perfect harmony will be greatly missed by his family and friends. Dave will be missed by his wife Pat; his sons Jason (Shivon) of Duluth and Zachary (Laura) of Minneapolis; five grandchildren; his brother Byron (Connie) of Eagan and his sister Valerie (Mike English) Miller of Stillwater.

Due to COVID concerns, the family will honor his memory privately. Memorials may be given to the Alzheimer’s Association.

To send flowers to the family in memory of David Miller, please visit our flower store.